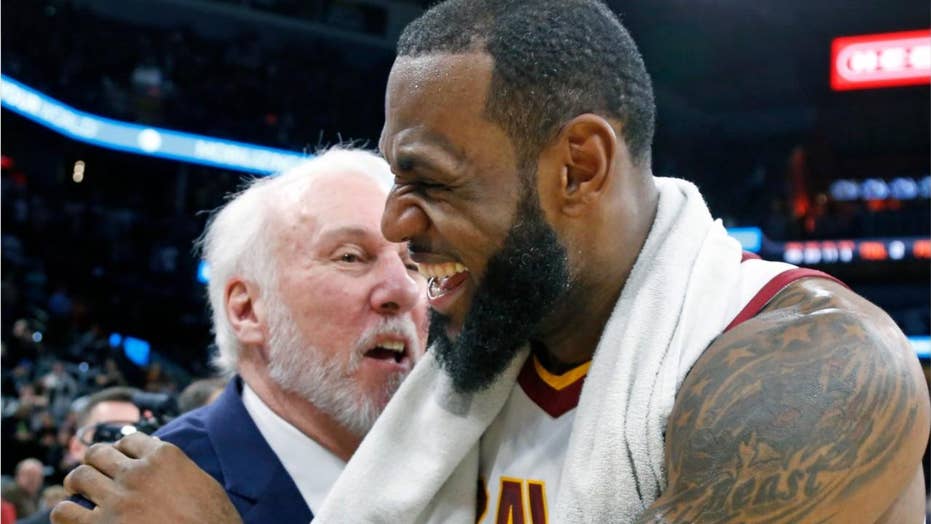 A TNT basketball reporter was slammed on social media Wednesday night after asking LeBron James about the death earlier in the day of San Antonio Spurs coach Gregg Popovich’s wife.

Allie LaForce came under fire for asking James the question immediately after his 46-point performance against the Indiana Pacers in Game 2 of an opening-round NBA playoff series, which helped James' Cleveland Cavaliers tie the series at one game apiece.

James appeared to be surprised by the question, but gave a heartfelt answer, the New York Post reported.

“Obviously I’m a huge Pop fan. I love Pop,” James said, using the coach's nickname. “That’s such a tragedy and my best wishes go out to Pop and his family. I know that’s devastating news and holy … It’s just a lot. The NBA family, we all sit together and compete every night. But something like this happens, it puts everything in perspective. So I send my well wishes and my prayers up to the heaven above.”

On Reddit, the conversation turned from whether it was the appropriate time to ask the Cavs superstar the question to misogynistic comments about LaForce's looks.

Some Twitter users thought it was unfair of LaForce to put James on the spot.

“Why would Allie LaForce ask LeBron about Greg [sic] Popovich’s wife passing away in the immediate post game interview?” one Twitter user asked. “Just an absolute bomb to drop on him after a game, and put him on the spot because the news came in during the game.”

Another user speculated that perhaps that James didn't know about the death until LaForce broke the news to him.

“Can’t believe Allie LaForce just broke the news to LeBron post-game, mid-interview that Popovich’s wife passed and after blindsiding him, asked his thoughts on this sensitive topic in front of millions on live TV. Extremely unprofessional and uncomfortable. TNT should be ashamed.”

James also tried to put out the fire in a video on his UNINTERRUPTED platform.

.@KingJames sends his thoughts and prayers to the family of Gregg Popovich, sets record straight on reporter’s question. pic.twitter.com/VCsFuEtFVU

“A lot of people think I was blindsided. That is absolutely false,” James said. “Allie LaForce told me she was going to ask me the question and if it was OK. Once I started talking about it on-air, actually my emotions kind of took over and that was just my emotions coming straight from the heart.”