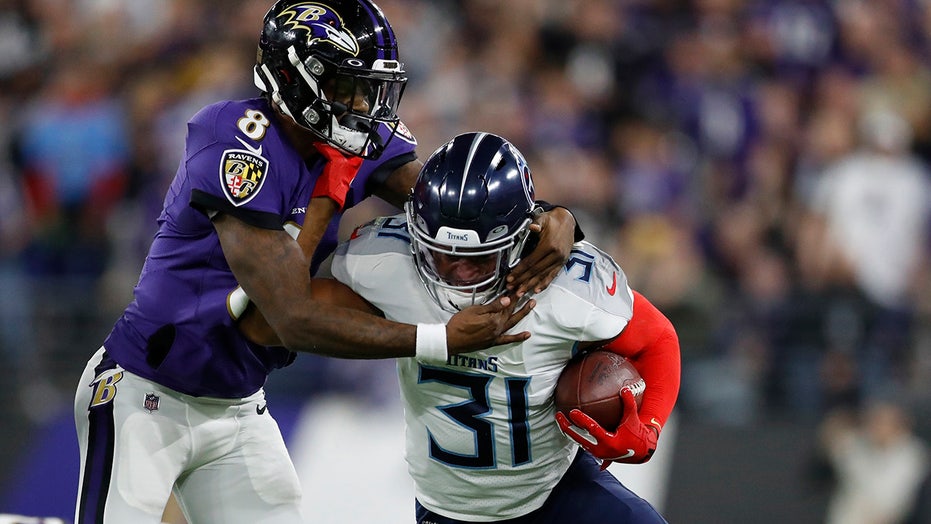 The Tennessee Titans defeated the Baltimore Ravens on Saturday night in their AFC Divisional Round playoff matchup and then added insult to injury when players began to mock the Ravens’ slogan.

Ravens running back Mark Ingram II introduced “Big Truss” after they defeated the Houston Texans in Week 11. Ingram said: "I would just like to introduce you all to the man, the myth, the legend, the MVP front-runner. If anybody else got to say something different about that, then come see me. If you got an issue with that, come see me about that. Big Truss. Woo woo. Lamar Jackson. In the flesh.”

Titans wide receiver Tajae Sharpe was among the players who stole the phrase. Sharpe, who finished the game without a catch, used it when introducing Derrick Henry to the media.

“The NFL rushing leader. If anyone got a problem with that, come see me about that. Big Truss. Woo woo. King Henry in the flesh. Woo woo,” Sharpe said, according to the Baltimore Sun.

Titans defensive back Kevin Byard was screaming “Big Truss” while on the way to the locker room.

LAMAR JACKSON'S TEAMMATE DEFENDS HIM FROM DOUBTERS IN MVP RACE: 'COME SEE ME'

Tennessee won the game, 28-12, thanks to a dominating performance from Henry.

The running back had 195 yards on 30 carries with a touchdown pass. He was so good that Titans quarterback Ryan Tannehill only need to throw the ball 14 times. He recorded 88 passing yards, had two touchdown passes and a rushing touchdown in the win.

The Titans play the winner between the Houston Texans and the Kansas City Chiefs.