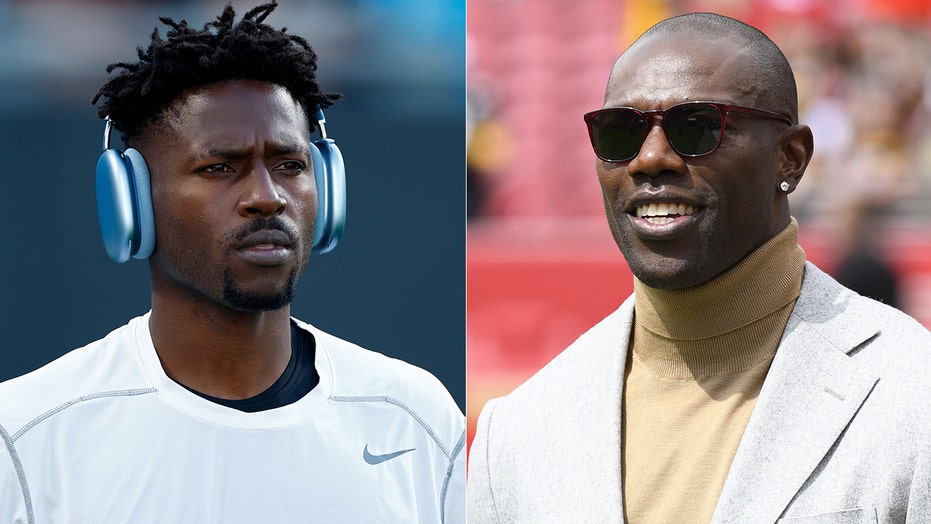 Terrell Owens was known to be a diva during his playing days, but the Hall of Fame wide receiver doesn’t want to be compared to Antonio Brown after his latest theatrics on Sunday afternoon.

Brown took off his shoulder pads and uniform while on the Tampa Bay Buccaneers sideline and left MetLife Stadium during the team’s game against the New York Jets. He also threw his undershirt and gloves into the crowd before exiting the field.

Tampa Bay Buccaneers wide receiver Antonio Brown wipes his face as he leaves the field after throwing his equipment into the stands while his team is on offense during the third quarter of an NFL football game against the New York Jets, Sunday, Jan. 2, 2022, in East Rutherford, N.J.  (Andrew Mills/NJ Advance Media via AP)

Users on social media were sent into a frenzy, and many fans questioned who is the bigger diva, but Owens wasn’t having any of it, and he decided to immediately respond to one of the fans who posted the question.

On Monday, the NFL Network reported that Brown argued with the coaching staff about not reentering the game because he was still dealing with a lingering ankle injury.

"What he told the staff, from what I understand, is that he was not going into the game because, in his mind, he did not feel he was healthy," NFL Insider Ian Rapoport said during ‘Good Morning Football.’ "The response then from the offensive coaches and from Bruce Arians was, ‘If you are not gonna go into the game when we tell you to go into the game, then you cannot be here.’ At that point, they threw him off the sidelines and then cut him from the team."

Tampa Bay Buccaneers wide receiver Antonio Brown (81) gestures to the crowd as he leaves the field while his team's offense is on the field against the New York Jets during the third quarter of an NFL football game Sunday, Jan. 2, 2022, in East Rutherford, N.J. Brown left the game and did not return. (Andrew Mills/NJ Advance Media via AP)

BUCS' BRUCE ARIANS ON ANTONIO BROWN FOLLOWING MELTDOWN: 'I DO CARE ABOUT HIM'

As of Monday night, Brown is still on the Buccaneers despite head coach Bruce Arians telling reporters after the wide receiver’s meltdown that he is "no longer a Buc."

A N.J. State Police trooper, background, watches as Tampa Bay Buccaneers wide receiver Antonio Brown (81) throws his gloves into the stands while his team's offense is on the field against the New York Jets during the third quarter of an NFL football game Sunday, Jan. 2, 2022, in East Rutherford, N.J. (Andrew Mills/NJ Advance Media via AP)

The details surrounding the incident have yet to come out. Reports indicated that Brown was concerned about his ankle and didn’t want to play. Arians said Brown never told him he was injured and added that the two had a "conversation" and that the player left the field. Arians didn’t say what the conversation included.

According to ESPN, the Buccaneers were talking with the NFL about to move forward with Brown’s situation. The wide receiver is sure to face some kind of discipline from the NFL due to the outburst and leaving the stadium in the middle of the game against the New York Jets.

The Buccaneers still had Brown on their official roster.