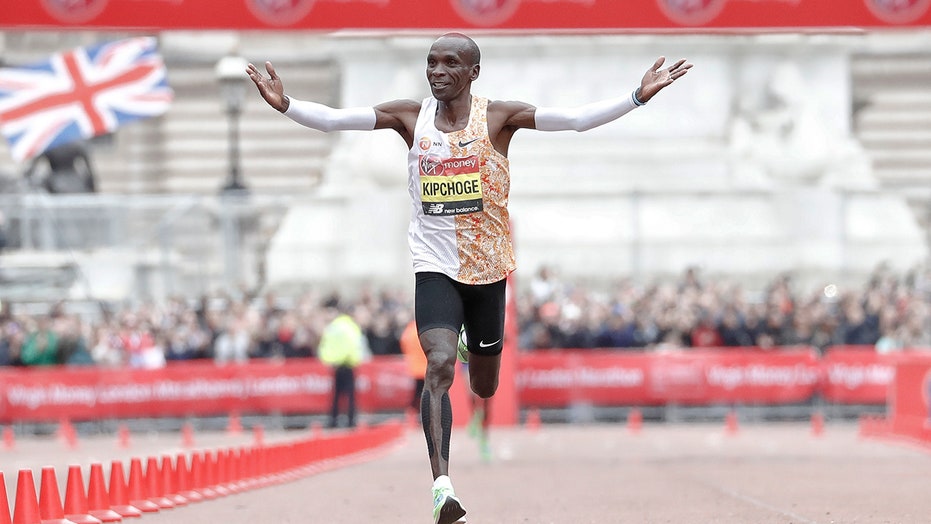 In October, Kipchoge will make an audacious second attempt at breaking the mark -- and he is confident he can succeed this time.

“This time I will try to work not harder, but smarter,” he told Sky News from the Iffley Road Sports Complex in Oxford on Monday. “I always say that 100 percent of me is nothing compared to one percent of the team. The team is absolutely crucial if I am to achieve this.”

He added: “I will work to a program with my coach. What will be different this time will be my mentality. I’ve learned that if you believe in yourself and train for your goal you can achieve it.”

Marathon world record holder Kenya's Eliud Kipchoge poses for photographers next to an image of British athlete Roger Bannister, who in 1954 ran to become the first person ever to break the four-minute mile barrier, at the Iffley Road Track, in Oxford, England, Tuesday, April 30, 2019. (AP Photo/Matt Dunham)

Kipchoge, who holds the official world record of 2:01:39, which he set in Berlin last September and has won the last 10 marathons he has entered, attempted to smash the symbolic mark in May 2017 in Italy, coming in just 26 seconds shy.

The 34-year-old Kenyan won the London Marathon on April 28.

“For anybody involved in endurance sport or athletics, this is the ultimate sporting challenge,” he told Sky News. “It’s almost superhuman. For anybody who runs to get near a three-minute kilometer [4:49-minute mile] is pretty extraordinary. There are very, very few people on the planet who can run at 2:50 pace per kilometer [4:33 per mile] for 42 kilometers [26.2 miles]. It’s unthinkable, but if anyone can do it, Eliud can.”

The attempt will be broadcast around the world, however, it might not be ratified by the International Association of Athletics Federation because he will have to use “pacer” runners dropping in and out of the race at certain times to help keep him running at the required speed.

Kipchoge said he will pick a flat course with little elevation for his run.

The Iffley Road Sports Complex in Oxford is where Roger Bannister broke the four-minute mile in 1954.

"Roger Bannister broke that barrier here on May 6th, 1954 and on May 6th, 2017 I tried to break the two-hour marathon, so there's a big relationship," Kipchoge said.