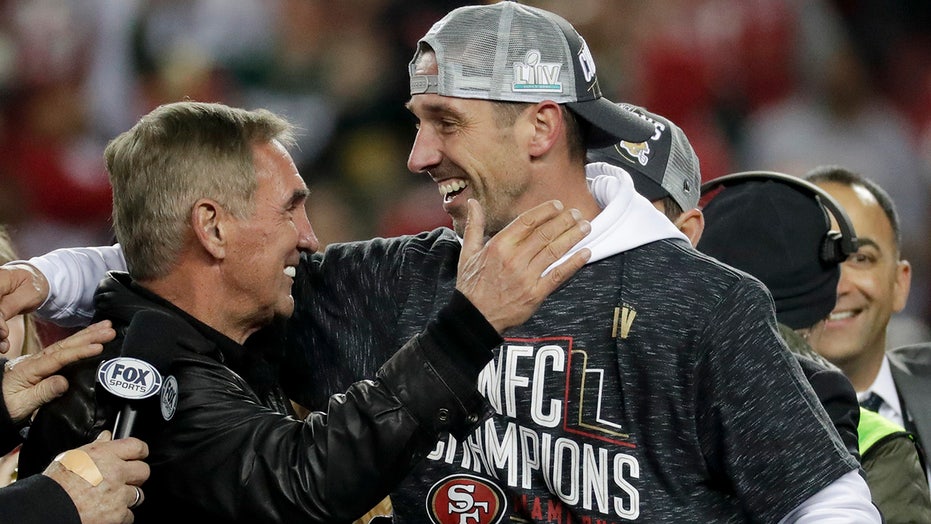 Kyle Shanahan is leading the San Francisco 49ers to Super Bowl LIV in Miami Gardens, Fla. -- and is making history while doing so thanks to his legendary father.

Kyle and Mike Shanahan will become the first father-son duo to have appeared in a Super Bowl game as head coaches.

Mike Shanahan was the 49ers’ offensive coordinator during Super Bowl XXIX — the last time San Francisco won a Super Bowl. He then won a pair of Super Bowls as head coach of the Denver Broncos.

Kyle Shanahan already has some Super Bowl experience. He was the Atlanta Falcons’ offensive coordinator in Super Bowl LI against the New England Patriots. The Falcons infamously blew a 28-3 lead, giving the Patriots and Tom Brady another ring.

Mike Shanahan watched his son and the 49ers defeat the Green Bay Packers in the NFC Championship Game and then took the podium to hand his son the George Halas Trophy.

“It was pretty special,” Kyle Shanahan said of receiving the trophy from his father. “To get a trophy handed to you by anyone is really cool. ... It was pretty cool it happened there at the end.”

It will be the first time San Francisco has made the Super Bowl since the 2012 season. The 49ers lost that game to the Baltimore Ravens 34-31, in a matchup that featured another familial first: Baltimore Coach John Harbaugh besting his younger brother, Jim, who was the coach of the 49ers.