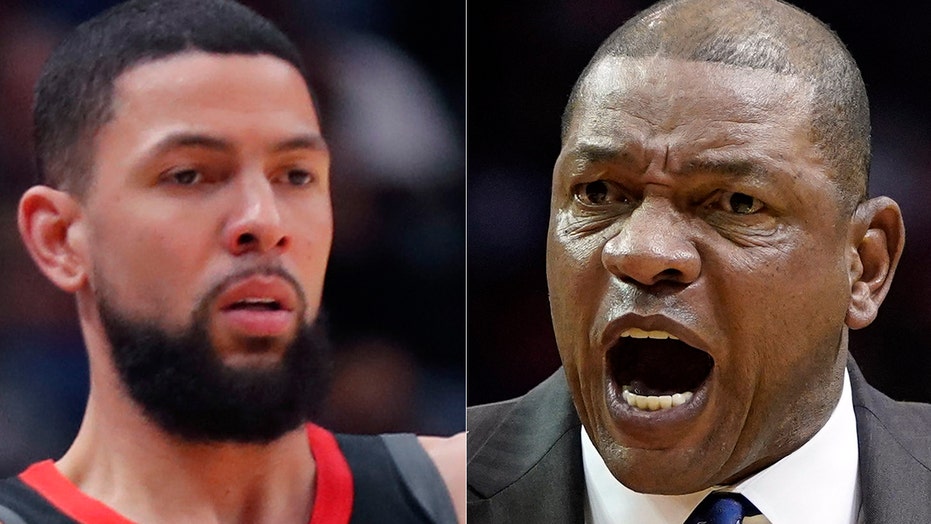 Houston Rockets guard Austin Rivers was seen Wednesday night calling on the referees to give his father, Los Angeles Clippers coach Doc Rivers, a technical foul during their game.

The moment came with just under two minutes left to play in the game, with the Rockets up 96-88. Doc Rivers exploded on the referees and Austin Rivers was seen behind one of the officials making his hands into a “T” to signify a technical foul.

When Doc Rivers didn’t let up, he received the technical foul from the referee. Austin Rivers was delighted.

“I did,” Austin Rivers told reporters after he was asked whether he enjoyed the technical foul on his father, according to ESPN. “I knew it was coming. I could see it. I've seen that look before -- many times. Once he starts blinking his eyes fast, and he starts [imitates Doc getting mad], that's when I know he is about to level up. So I just started telling Tony to get him. They got him. He's out of here.”

Doc Rivers explained afterward his fury began with about five minutes to play in the game, when he sought to challenge an out of bounds call the referees had made.  James Harden appeared to have poked the ball out of Clippers forward JaMychal Green’s hand before Green ran into Clint Capella.

Capella was injured on the play and the Rockets called the timeout while he was being attended to, according to ESPN. The Clippers then called for a timeout so they could challenge the call that the ball went off Green. However, Rivers said he was told that he took more than the allowed time given to coaches to ask for a challenge.

During the timeout, Patrick Beverly was given a technical foul by Brothers and Rivers was then given two technical fouls and ejected for arguing.

“The refs screwed up,” Doc River said. “I made a challenge. They actually said I was right in the challenge, but that I took over the 30-second time to call it. So then two refs walked over to me and told me that that means you don't win the challenge. But you get your timeout back. The arena actually put the extra timeout back up on the board. So we think we have two timeouts. I think [we have two timeouts] because two refs actually walked over to me and told me, told all of our assistants and told our players.”

Brothers told a pool reporter that Rivers was informed he would not be charged a timeout for the challenge.

Austin Rivers, however, was still pretty happy over the technical fouls.

“I was just trying to help out the situation,” he said, jokingly. “Listen, guys, I don't ever like to escalate anything. Y'all don't know me for that. I've always been a peacemaker. That's just 100 percent Doc's gotta keep his cool.”

Even better for Austin Rivers, the Rockets came away with the win, 102-93.