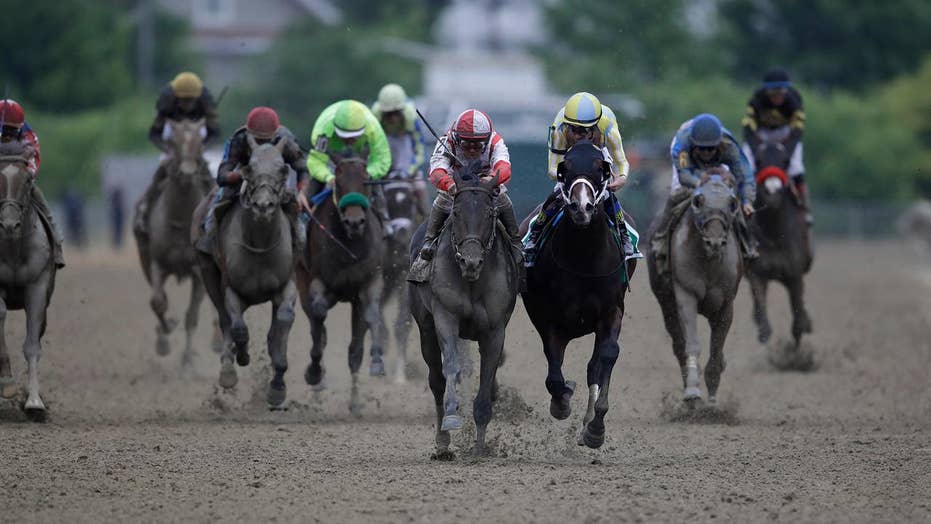 Sometimes it pays to have a fresh horse.

Cloud Computing skipped the Kentucky Derby, while eventual winner Always Dreaming and Classic Empire mixed it up in the mud at Churchill Downs.

Two weeks later, Cloud Computing pounced on those two horses in the Preakness, pulling off an upset victory at 13-1 odds Saturday. He became the first horse to skip the Derby and win the second leg of the Triple Crown since filly Rachel Alexandra in 2009.

"Some of the reason that we won today was because we were patient and didn't throw an inexperienced horse against a 20-horse field in the Derby on a very difficult track," winning co-owner Seth Klarman said. "We made a great call."

Always Dreaming and Classic Empire dueled for most of the race before Classic Empire stuck his nose in front midway on the far turn. It looked as if Classic Empire would go on to win, but Cloud Computing ran him down on the outside.

Always Dreaming faded to eighth in the 10-horse field on a cool and cloudy day at Pimlico. The crowd of 140,327 and wagering total of $94,127,434 were records, bettering the marks set last year.

New York-based trainer Chad Brown earned his first victory in a Triple Crown race. Castellano won for the second time. He rode Bernardini to victory in the 2006 Preakness.

Castellano comes from a racing family, with a father, uncle and brother who have been jockeys.

"We've been working for a long time for this moment," he said. "It's great for the family."

The 142nd Preakness had been billed as a match race between Always Dreaming and Classic Empire, and it was from the start.

They broke out of the starting gate next to each other and the fight was on. Always Dreaming took a slight lead with Classic Empire on his flank.

Meanwhile, Cloud Computing was back in third as Castellano watched the duel unfold in front of him.

Always Dreaming was the first to throw in the towel, surrendering the lead to Classic Empire midway around the final turn.

"We didn't have an excuse," said Todd Pletcher, who trains Always Dreaming. "We were in a position we expected to be, and I think the turnaround was a little too quick. He ran so hard in the Derby and today just wasn't his day."

Always Dreaming lost for the first time in five races this year. He'd won his first four by a combined 23 1/4 lengths.

Classic Empire and Julien Leparoux went into the stretch with three-length lead, seemingly on his way to the winner's circle.

At that point, trainer Mark Casse thought he was headed there, too.

"Of course," he said. "But I thought I was going to win a lot of times before, so it doesn't shock me."

But Classic Empire also paid a price for putting away Always Dreaming. Classic Empire fought on to the finish line, but couldn't hold off a fresh horse in Cloud Computing.

"Certainly I'm not going to dispute the fact that I brought in a fresh horse as part of our strategy," Brown said. "Our horse is very talented, too. Classic Empire and Always Dreaming are two outstanding horses, and our strategy was, if we are ever going to beat them let's take them on two weeks' rest when we have six (weeks), and it worked."

After Cloud Computing ran third in the Wood Memorial, Brown and the owners decided the colt would benefit from skipping the Derby. He came into the Preakness after a six-week break.

"It just didn't work out in the Wood. We just ran out of time," Brown said. "We just really zeroed in on this race, and thankfully it worked out."

The victory was especially sweet for Klarman, who grew up a few blocks from Pimlico. He turns 60 on Sunday. He and William Lawrence have been buying and racing horses together since 2006.

"This is the culmination of 25 years of hard work and learning and trying to figure this game out," said Klarman, president of the Baupost Group, a hedge fund valued at $31 billion.

"In my regular life, I'm a long-term value investor. This is gambling. It's really been a thrill and this is the highlight of our career so far as thoroughbred owners."

Klarman, who races as Klaravich Stables, is a minority owner of the Boston Red Sox.

Lookin At Lee, the Derby runner-up, was fourth. Gunnevera was fifth, followed by Multiplier and Conquest Mo Money. Hence was ninth and Term of Art last.