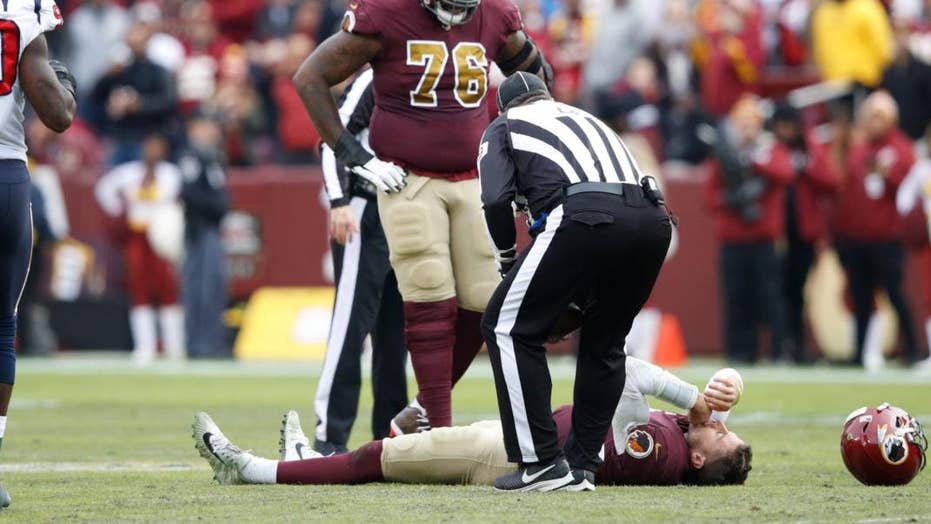 Washington Redskins Quarterback Alex Smith’s right ankle bent in an awkward direction during a play against the Houston Texans. Smith was carted off the field.

It has been one year since Washington Redskins quarterback Alex Smith suffered a devastating leg injury in a game against the Houston Texans which put his NFL career in jeopardy.

Smith suffered a broken tibia and fibula, battled an infection and at one point doctors reportedly considered amputating his leg. He also needed 17 surgeries to even get to a place where he can take his leg brace off, according to the Washington Times.

Elizabeth Smith, Alex’s wife, shared a heartwarming video Tuesday showing her husband’s recovery from her sitting in a hospital waiting room to her husband recovering at their home. The video was shared exactly one year since Alex Smith's devastating injury.

Smith had led the Redskins to a 6-4 record in his first season with the Redskins after he was acquired in a trade with the Kansas City Chiefs prior to the start of the 2018 season.

Washington and Smith agreed to a four-year, $94 million deal before last season.

Over a 13-year career that has spanned the Redskins, Chiefs and San Francisco 49ers, he has recorded 34,068 passing yards, 193 touchdown passes, and three Pro Bowl nominations.

Smith said over the offseason he plans on playing football again. Washington currently has quarterbacks Dwayne Haskins, Case Keenum and Colt McCoy on their roster.