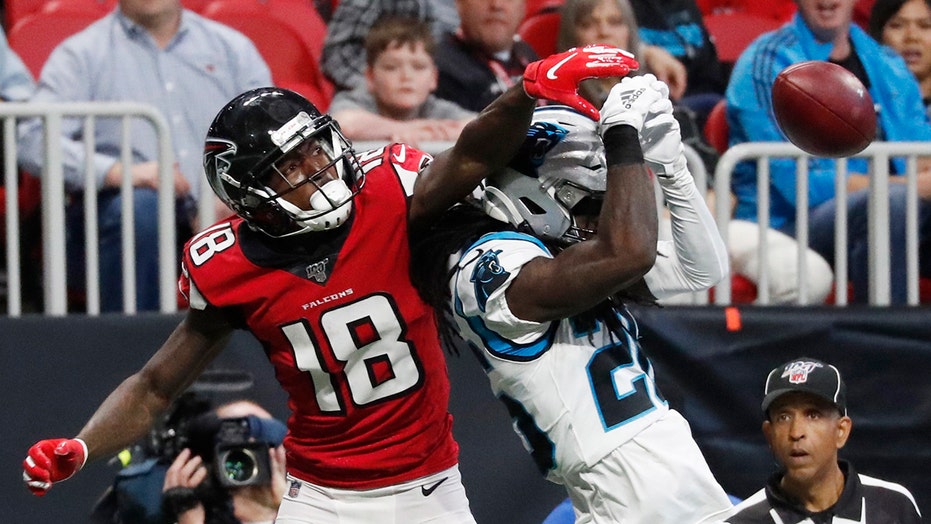 The Carolina Panthers lost to the Atlanta Falcons on Sunday in their first game since coach Ron Rivera was fired and cornerback Donte Jackson appeared to be frustrated with some of the play-calling during the game.

Jackson, who is in his second year with the Panthers, ripped his own defensive coaches after the Panthers lost to the Falcons, 40-20. He said two “horrible calls” led to Falcons touchdowns.

Atlanta Falcons wide receiver Olamide Zaccheaus (17) makes a catch against Carolina Panthers cornerback Donte Jackson (26) during the second half of an NFL football game, Sunday, Dec. 8, 2019, in Atlanta. ran for a touchdown on the play. Zaccheaus(AP Photo/John Bazemore)

“First of all, it was two bad calls. Two horrible calls,” Jackson said after the game, according to the Charlotte Observer. “Two calls that we didn't call in those situations all week at practice.”

“We sent everybody. To leave the corners out there on an island by (themselves)?” Jackson said, according to the newspaper. ... Zero coverage. No help. Backed up. With a quarterback like that? I don’t care if you’re Champ Bailey or any of those cornerbacks on the [NFL] 100 [best all-time players] list, that is a play that’s hard to make for any guy.”

Perry Fewell, who replaced Rivera as the interim head coach, defended the blitz call saying he felt like the team needed a “spark.” On Monday, he said he spoke to Jackson about his comments and expressed his disappointment that the corner aired out his frustrations with reporters.

The Panthers fell to 5-8 with the loss Sunday.