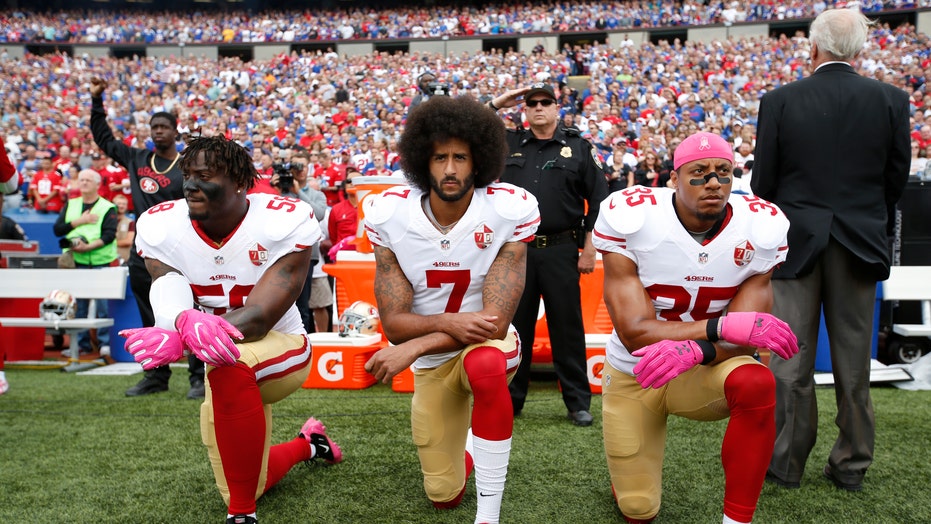 Four years later, the NFL admitted it was wrong and said it now supports Colin Kaepernick in his fight against racial injustice, encouraging players to take a stand - or a knee - for the cause.

The league’s 101st season kicks off Thursday night, when the Super Bowl champion Kansas City Chiefs host the Houston Texans. NFL end zones will be inscribed this season with two slogans: “It Takes All Of Us” on one side, “End Racism” on the other.

As part of its social justice awareness initiatives, the NFL also will allow similar visuals on helmets and caps. Players will be permitted to wear decals on the back of helmets, or patches on team caps, displaying names or phrases to honor victims of racism and/or police brutality.

“The NFL stands with the Black community, the players, clubs and fans,” NFL Commissioner Roger Goodell said last week. “Confronting recent systemic racism with tangible and productive steps is absolutely essential. We will not relent in our work.”

After George Floyd’s death at the hands of a Minneapolis police officer ignited nationwide protests over racial injustice and police brutality, Goodell apologized to players for not listening sooner and encouraged them to protest peacefully.

Floyd died after a police officer pressed his knee into Floyd’s neck for nearly eight minutes. His death in May awakened many people, including NFL owners, to the root of the issues that led Kaepernick to kneel during “The Star-Spangled Banner” in 2016.

Kaepernick’s demonstration was misinterpreted as an expression that demeaned the flag and country. President Donald Trump and many of his supporters continue to criticize players across all sports leagues for keeling during the national anthem. It will likely be a focal point for Trump during his campaign for re-election. But many who opposed Kaepernick’s stance now say they understand and support the movement.

Even Dallas Cowboys owner Jerry Jones appears to have eased his hard-line stance requiring players to stand during the anthem.

“If our players are there, they are sensitive to and respect what America is as it relates to the flag,” Jones said in a radio interview last week. "I’ll assure you that. I’d hope that our fans — and I think they will — understand that our players have issues that they need help on. They need help from the majority of America. They need help.”

“I do believe that the club owners are at a place over the last few years, it’s taken some a little longer than others, but it becomes a heart issue,” Vincent said. “And they do have an appreciation for humanity and they understand that we have to do this together.”

Philadelphia Eagles owner Jeffery Lurie said some of his fellow owners are “embarrassed by our country” and they have meetings scheduled to discuss how they can do more to help.

“I actually believe that in most of the owners’ hearts and minds, they are really wanting to be proactive,” Lurie said. “It’s very important, though, that we support policies that are part of the solution, and in terms of elected officials, locally, statewide and maybe, obviously, important nationally.”

Still, not one NFL owner has hired Kaepernick, a talented quarterback who led the San Francisco 49ers to within 7 yards of defeating Baltimore in Super Bowl 47. The 32-year-old Kaepernick hasn’t been offered a contract since he last played in 2016.

“Colin was a visionary, a pioneer for our generation and we are truly grateful for him,” said NFL agent Andre Odom. “Making such a huge sacrifice for change isn’t easy for anyone. Now seeing the NFL acknowledge that they should’ve listened to him just shows that the time is now to really stand up, strategize, implement and execute initiatives for the African American community. ... It takes us all.”

The shooting of Jacob Blake, who was critically wounded by a police officer last month in Kenosha, Wisconsin, led to brief shutdowns of the NBA and NHL playoffs and sparked more conversations about demonstrations by NFL players.

NBA players got owners to agree to establish a social justice coalition as a condition of their return to play, made up of players, coaches and owners, that would focus on issues such as voting access and advocating for meaningful police and criminal justice reform.

The NHL was criticized for being slow to respond but followed the NBA’s decision to postpone games a day later.

All eyes will be on the NFL now with the Chiefs and Texans up first.

“We’ll do something in unison to show support for everybody out there that doesn’t have the platform we have,” Chiefs quarterback Patrick Mahomes said.

Many coaches have stressed unity, asking players to come together for any type of demonstration they choose. That would put some players in uncomfortable positions because it’s difficult to get an entire roster to agree.

“If I had it my way, that’s exactly what we’d do is express ourselves individually but love and support one another collectively,” Cowboys quarterback Dak Prescott said.

Jaia Thomas, a sports and entertainment attorney and founder of Diverse Representation, squashed the argument by some of Kaepernick’s critics that protests distract from the real issues.

“I think protests by players are an excellent way to bring awareness to various issues ranging from criminal justice reform to police brutality to the racism and inequality still plaguing this country,” Thomas said. “I’m 100% behind players who continue to kneel and protest."

Beyond protests, everyone agrees action is necessary.

“The athletes have a lot of power as we’re seeing,” Hall of Fame running back LaDainian Tomlinson said. “They have a lot of influence, especially in their own communities. They have the biggest microphone in their communities. So create dialogue with their local elected officials, mayors, district attorneys. Athletes can call on these people in their towns to have better communication between the neighborhood and elected officials, police unions and police districts all over the country. I think that relationship can be better.