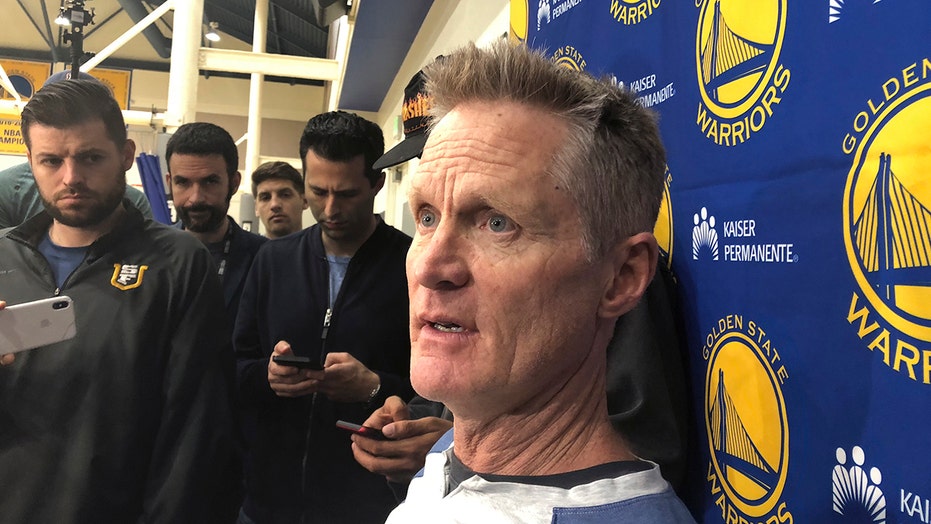 Whether Durant sees it that way going into free agency next month, Kerr isn't about to guess. Especially now that the two-time NBA Finals MVP is headed for what could be a yearlong recovery from surgery for a ruptured right Achilles tendon.

"Well, the injury kind of throws everything for a loop, so I have no idea what Kevin's going to do," Kerr said Friday. "I know that we all want him back, and we think this is a great situation for him and vice versa. So, hopefully we get him back and keep this thing going with the understanding that he's a free agent and we want what's best for him, and he's free to make any choice he wants. Hopefully he's back, and we will all give him any advice, any counsel that he needs. And ultimately he's going to make his own decision. He's earned that."

A day after losing Game 6 of the Finals to the champion Toronto Raptors, Kerr and general manager Bob Myers braced for an uncertain summer while still trying to cope with the heartbreak of seeing Durant go down in Game 5. Then Klay Thompson tore the ACL in his left knee during the third quarter of Thursday night's 114-110 loss in the final game at Oracle Arena. Durant was injured in Game 5 on Monday night in Toronto, then underwent surgery Wednesday in New York.

"This year more than any other tested the fabric of our team," Myers said. "It's hard to not value a championship as much as I value short of winning a championship, and in some ways more than winning a championship, this year I might have been the proudest of our resolve. I don't know if that's evident. I hear that from people in the Bay Area, the support we've gotten, the things people say about kind of conducting ourselves as champions. That stuff matters. Winning matters, too, obviously. It all matters. Try to continue to hang onto that culture."

In February, Durant became frustrated over all the fuss and speculation about where he might play next season, and said "I'm trying to play basketball." He signed a two-year contract last summer that includes a player option for the 2019-20, so Durant can become a free agent to pursue a maximum five-year deal. The Warriors are expected to try to sign both Durant and Thompson to those max contracts.

Asked how optimistic he is about bringing back Durant, an emotionally exhausted Myers said, simply, "I don't know" while noting of free agency "it's never what you think."

"He's a guy who's been, like I said, what more can we ask for from him?" Myers said. "He's been everything to us, the guy has been everything that we could have ever dreamed. He's been an awesome member of this organization. There's so much he does in the community that probably doesn't get as many headlines, things he's done in D.C., his foundation, how he kind of lives his life. We're lucky to have been around him. Hopefully we'll keep doing that."

All season, the Warriors were determined to cherish this ride together knowing the roster could look far different once training camp rolls around in September — along with the venue as Golden State moves across the bay to the new Chase Center in San Francisco. Golden State's players also insist they have never taken for granted the special five-year run featuring three championships and five consecutive Finals berths.

"In the history of this NBA you could highlight every team that was supposed to win or had the best team and all the different story lines. And 82 games and a full playoff run, a lot can happen," Stephen Curry said. "It's just a matter of how much you fight and just leave it all out there on the floor. I think the way that we have talked and described this journey and whatnot, I don't think there's ever been a situation where we have taken anything for granted. And that's something I can look back and just hold.

"We all can hold our head high that we gave it everything we got. ... Two guys who go down and the game's kind of taken away from them in those moments, it's not a good feeling at all. And it's kind of a helpless feeling in terms of two freak plays that send these guys back to the locker room. So it's tough, but it's part of basketball, it's part of the game. Again, I just hope their recoveries are strong and they come back better than they were before."

Thompson's knee surgery has not yet been set. Kerr doesn't expect to ever see two injuries this severe in consecutive Finals games again.

He was still stunned a day later, and Myers, too. Now the GM must immediately turn his focus toward next week's draft and then free agency. Both expressed their tremendous pride in how the Warriors fought despite being denied a three-peat.

"You're talking about two career-altering injuries to two of your best players in back-to-back Finals games. Unheard of. It will probably never happen again," Kerr said. "We're in new territory now and you just have to keep moving forward."