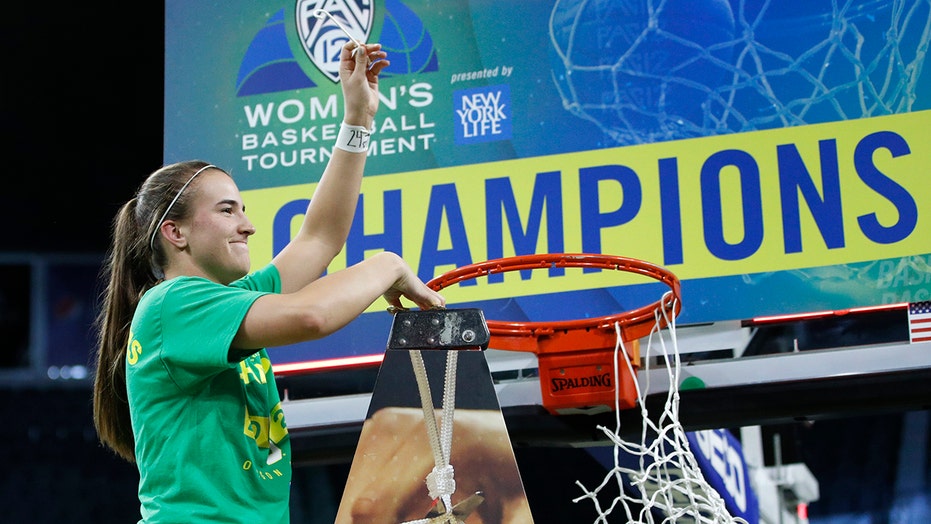 Sabrina Ionescu said she wanted to cut down three nets with her teammates before closing out her illustrious career.

One down, two to go.

Ionescu had 20 points, 12 assists and eight rebounds to lead No. 3 Oregon to an 89-56 victory over No. 7 Stanford in the Pac-12 tournament title game Sunday night.

"We were here last year, and we knew what it was like to lose," said Ionescu, who was named the tournament's MVP. "This is one of the nets we wanted to cut down this year."

The Ducks and Cardinal were playing for the tournament championship for a third consecutive year. Stanford won last year's championship and Oregon won in 2018.

Oregon shook off a sluggish first quarter and used a stifling defense to thwart most of Stanford's efforts, while fueling their offense at the other end.

"You get one shot, and they're going the other way pretty fast," said Stanford coach Tara VanDerveer, who remains five victories shy of passing Pat Summitt (1,098) as the winningest coach in women’s college basketball history. "I think the consensus number one player in the country running their offense, and they have got lights-out shooters."

Stanford, in the Pac 12 championship for a 17th time, did its best to quiet the crowd early.

The Cardinal frustrated the high-powered Ducks while keeping Ionescu scoreless and took a 17-14 lead after the first quarter despite shooting 5 of 14 (35.7%) from the floor. Williams did most of the damage for Stanford, scoring 11 points on 3-of-5 shooting — all from 3-point range — plus a couple from the free-throw line.

Then the Ducks woke up.

The nation's most efficient offense shot 8 of 12, including 4 of 6 from 3-point range, in the second quarter to outscore the Ducks 29-9.

While Ionescu came to life, it was the 5-foot-8 Moore who ignited the Ducks with her tenacious play at both ends. Whether she was challenging Williams on defense, battling for rebounds against 6-1 Francesca Belibi and 6-3 Alyssa Jerome, creating offense for her teammates or making jumpers, she continued to fuel Oregon's fire.

"Your great players find a way to step up in the biggest moments," Oregon coach Kelly Graves said. "Minyon, there have been games when she's struggled. But she's got the heart of a champion, and on the biggest night, on the biggest stage, she was able to step up her game, and I thought it changed the whole game."

With the game tied 22-22 early in the second quarter, the Ducks closed the half on a 21-4 run, with Moore scoring nine of the points, while adding an assist, rebound and steal to her stat sheet.

"When she plays that hard we want to play that hard for her as well," Ionescu said. "I think she set the tone defensively, which fueled her offense and our offense as well."

"I think we're gonna be a No. 1, honestly I don't know how much that matters," Graves said. "Everybody is gonna be good. We're praying for Portland, I'm hoping that's where they put us, I think that would be special. I got a feeling if they do, we're gonna break some regional attendance records up there.

"That's beyond my pay control. I can lobby, but I'm not going to. I'll let our work do the talking."

Work he wasn't afraid to remind everyone about in every postgame press conference at the tournament.

"Did I mention that we've won 10 games (against teams ranked among the top 16 since Dec. 1), and five of those on the road?" Graves said.

The top 16 seeds in the NCAA Tournament host the first weekend, which means the Ducks will begin their title quest in Eugene, where they went 15-0 this season.

Mandalay Bay Events Center felt like home for the Ducks' three-game tournament run, which saw much of the announced 6,794 in attendance on Sunday clad in Oregon colors.

Stanford: After hitting four of their first nine shot attempts, the Cardinal went 15 of 46 (32.6%) from the floor the rest of the game.