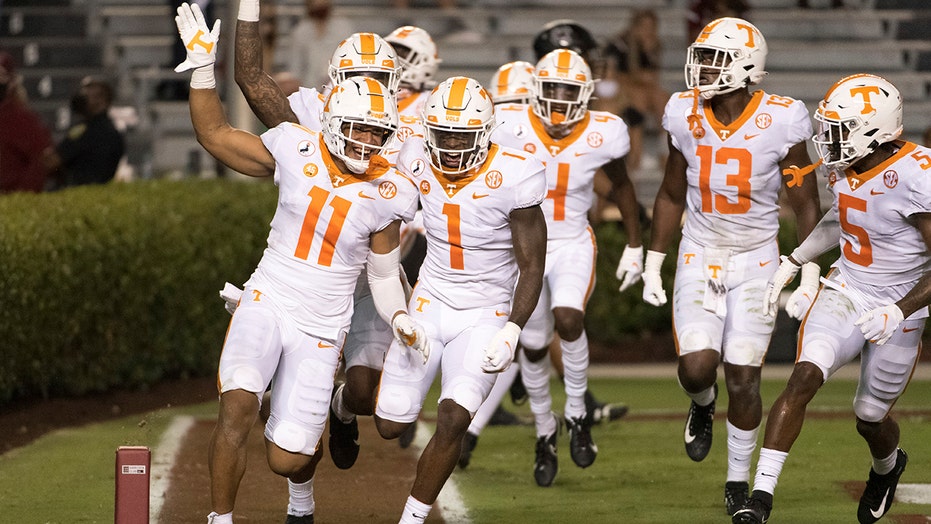 Tennessee quarterback Jarrett Guarantano expected a difficult time at South Carolina. He also expected the 16th-ranked Vols to come out on top, no matter how hard things got.

The Vols squandered a two-touchdown lead in the second half and held on to defeat the Gamecocks 31-27 for their seventh straight victory.

The game wasn't decided until a Tennessee punt touched South Carolina's Cam Smith and the Vols' Jimmy Holiday recovered with 1:24 to go.

“When you go on the road in the SEC, nothing comes easy,” Guarantano said. “You saw some of that today.”

There was also plenty of Guarantano to see, as well. The fifth-year passer threw the tie-breaking touchdown to Josh Palmer with 9:35 left in the game, then stayed poised enough down the stretch to keep South Carolina at bay.

Despite the nerve-wracking finish Pruitt said it was mission accomplished for the Vols.

“The bottom line is we’re leaving Columbia with a ‘W’, and that’s what we came here for,” he said.

Tennessee looked to have the Southeastern Conference and season opener in hand when they went ahead 21-7 on Eric Gray's 12-yard scoring run on their opening drive of the third quarter.

But South Carolina rallied behind first-time starter quarterback Collin Hill with two touchdowns and a field goal to tie it at 24-all in the fourth quarter.

That's when Guarantano struck with back-to-back big plays for the deciding score.

Guarantano was heavily pressured when he got the ball to an all-alone Brandon Johnson for 33 yards inside South Carolina territory. The next play, Guarantano threw a picture perfect pass to Palmer for a 32-yard touchdown.

Palmer was grateful Guarantano trusted him with the play. “But it was just a traditional go route, beat the defender and caught it over the shoulder,” he said.

For Pruitt, there was lots of inconsistency to correct for Guarantano and the offense going forward.

“We've got to go back and figure out where we are offensively and where we can create some consistency," the third-year coach said. “But we put some drives together and finished the game off.”

South Carolina looked like it had a final chance when it forced a Tennessee punt with 90 seconds left. But the punt touched Cam Smith after it hit the ground, Holiday recovered and the Vols ran out the clock for the win.

“No one play lost us the game,” South Carolina coach Will Muschamp said.

Guarantano finished 19 of 31 for 259 yards. He also rushed for Tennessee's first touchdown.

South Carolina, with a new offensive coordinator in ex-Colorado State coach Mike Bobo and new quarterback in grad transfer Hill, showed some spark as it took the opening drive 75 yards for a touchdown on Kevin Harris' 3-yard run.

Linebacker Henry To'o To'o had a 32-yard interception return for a touchdown, catching the ball after it bounced off receiver Shi Smith's hands and tip-toeing down the sideline for the score.

Hill blamed himself for the interception, throwing the ball behind Smith where To'o To'o could make the defensive play.

“The play that sticks out to me is the pick six,” Hill said. “You just can't turn the ball over.”

Tennessee: Vols AD Phil Fulmer said Thursday the school extended Pruitt's contract through 2025, an indicator of how strongly it feels about its current leadership. While Tennessee has some work ahead, it kept its poise down the stretch to keep its win streak alive.

South Carolina: The Gamecocks' attack had scored only one offensive touchdown in its final three games last year. They tripled that total in this one as Hill looked confident in his first start since transferring from Colorado State.

Hard to see Tennessee falling in the rankings with a solid SEC road win to start the season.

The Gamecocks, trailing 31-24, had a fourth-and-12 at the Tennessee 28 with less than four minutes left when Muschamp chose to send Parker White on for a 45-yard field goal for South Carolina's final points. The strategy of defense and timeouts appeared to work until the punt muff. Muschamp said he might not have kicked if “it had been less than fourth-and-12.”

South Carolina had permission from the state to allow about 20,000 people into Williams-Brice Stadium due to the pandemic. There were 15,009 who turned out, sitting at prescribed spots in the socially distant stadium. Those that were there still made an impact, To'o To'o said. “You couldn’t really tell it was empty,” he said. “South Carolina’s fans did a great job of coming out supporting them, playing. They were loud.”

Tennessee plays its home opener against Missouri next Saturday.

South Carolina goes on the road to face No. 5 Florida on Saturday.