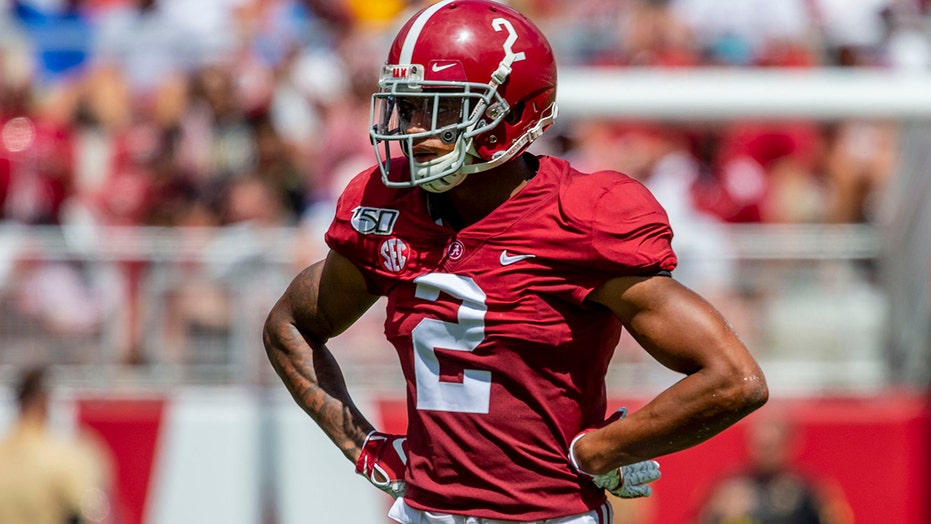 The 2021 NFL Draft will kick off on Thursday and for three young prospects, they will be following in the footsteps of their fathers.

Cornerbacks Patrick Surtain II, Jaycee Horn, and Asante Samuel Jr. will embark on their NFL careers this week but before their names get called by commissioner Roger Goodell, let’s take a look at the NFL veterans they get to call dad.

In this Sept. 21, 2019, file photo, Alabama defensive back Patrick Surtain II (2) waits for a play during the team's NCAA college football game against Southern Miss in Tuscaloosa, Ala. (AP Photo/Vasha Hunt, File)

The former Alabama cornerback is one of the top-rated defensive players heading into this year’s draft. Surtain started in 12 games for the Crimson Tide as a freshman, recording 37 tackles, one interception, and seven pass breakups. He returned the following year as a starter totaling 42 tackles, two interceptions, eight pass breakups and three forced fumbles. In his junior year, he helped Alabama win the national title.

But Surtain II certainly learned a thing or two from his father, longtime Miami Dolphins cornerback Patrick Surtain. The three-time Pro Bowler was drafted by the Dolphins in the second round of the 1998 draft. He played seven seasons before being traded to the Kansas City Cheifs in 2005.

The senior Surtain totaled 538 tackles, 7.5 sacks, and 37 interceptions throughout his professional career.

Horn totaled 16 tackles and two interceptions his junior year before opting out of the remainder of the season.

Following in the footsteps of his father, the younger Horn is certain to skip a few steps. Joe Horn played two years of college football (1991–1992) at Itawamba Community College in Fulton, Mississippi. Unable to land a scholarship at a four-year school, Horn worked odd jobs for three years before landing a roster spot in the Canadian Football League.

The wide receiver's performance up north was good enough for the Kansas City Chiefs to draft him in 1996.  Named to four Pro Bowls, he was inducted into the New Orleans Saints Hall of Fame after totaling the second-most receptions and receiving yards in the franchise’s history.

Rodney Harrison #37 and Asante Samuel #22 of the New England Patriots celebrate after defeating the Philadelphia Eagles in Super Bowl XXXIX at Alltel Stadium on February 6, 2005 in Jacksonville, Florida. (Photo by Brian Bahr/Getty Images)

Asante Samuel Jr. had the NFL written into his future.

The elder Asante Samuel, is a two-time Super Bowl champ, four-time Pro Bowler and led the league twice in interceptions in 2006 and 2009. After getting drafted late in the fourth round by the New England Patriots in 2003, Samuel instantly made an impression on the field after getting the starting role due to injuries.

Two Super Bowl rings would end up on his fingers in New England. In 2008, he was one of the most sought-after free agents and wound up signing with the Philadelphia Eagles. In 2012, was traded to the Atlanta Falcons where he finished his career after two seasons.

Samuel Jr., who is also expected to get drafted in either the third or fourth round, lived up to his name at Florida State where he totaled 93 tackles, four interceptions and 29 pass breakups in three seasons.