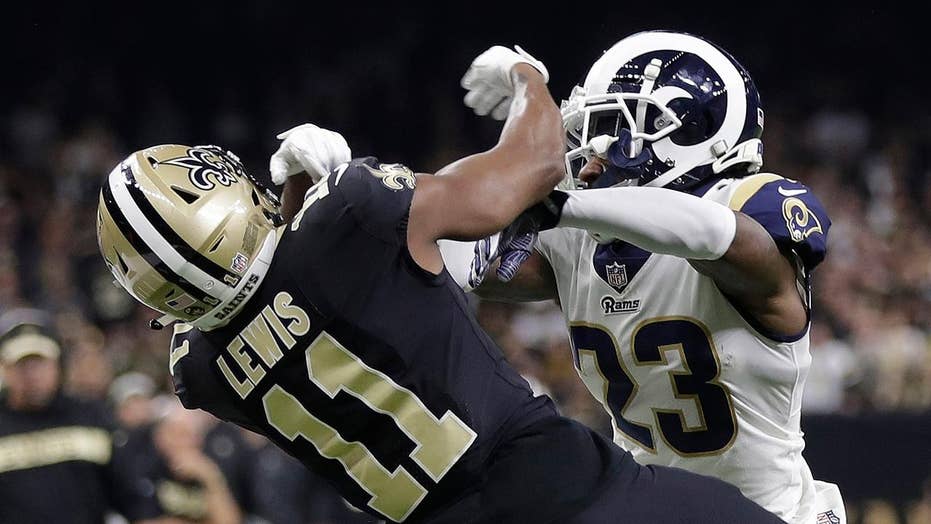 Two New Orleans Saints season-ticket holders filed a lawsuit against the NFL on Tuesday, asking a Louisiana state court judge to order Commissioner Roger Goodell to invoke an obscure rule that could force the final moments of Sunday's NFC Championship game to be replayed.

No penalty was called after Rams defensive back Nickell Robey-Coleman hit Saints receiver Tommylee Lewis while a Drew Brees pass was in the air with fewer than two minutes remaining in a tie game. A flag for pass interference would have given the Saints a first down and enabled them to run down the clock before kicking a potential game-winning field goal. Instead, New Orleans kicked a go-ahead field goal to take a 23-20 lead with 1:41 left. The Rams responded with a late field goal of their own and went on to win, 26-23, in overtime.

Robey-Coleman later admitted to reporters that his hit on Lewis constituted pass interference, while Saints head coach Sean Payton said the NFL office acknowledged the missed call to him after the game. Referee Bill Vinovich told a pool reporter that the play in question was "a judgment call by the officials" and added that he had not seen what happened.

According to Rule 17, Section 2, Article 1 of the NFL rulebook, the league commissioner "has the sole authority to investigate and take appropriate disciplinary and/or corrective measures if any club action, non-participant interference, or calamity occurs in an NFL game which the Commissioner deems so extraordinarily unfair or outside the accepted tactics encountered in professional football that such action has a major effect on the result of the game." Remedies include reversal of a game's result or the rescheduling of a game -- in its entirety or from the point when the act occurred.

"Why is the rule there if it's not going to be implemented?" asked attorney Frank D'Amico, who filed the suit in state Civil District Court in New Orleans on behalf of Tommy Badeaux and Candis Lambert.

The NFL did not immediately respond to requests for comment.

The question is whether an officiating mistake -- even an egregious one -- is the type of "club action, non-participant interference, or calamity" that merits the remedy D'Amico's clients seek.

Mike Pereira is among the doubters.

"I understand the frustration," the former vice president of officiating for the NFL, now a Fox Sports analyst, told The Associated Press in an interview. But, he doesn't believe the rule applies in this case.

A hearing is tentatively set for Monday -- six days before the Rams meet the New England Patriots in the Super Bowl in Atlanta.