The New England Patriots and a flustered Tom Brady lost to the Kansas City Chiefs 23-16 on Sunday -- the Pats' first loss at home in 21 games.

The home win streak in the regular season and playoffs was tied for the longest in team history; it also was the third-longest string in NFL history.

The Patriots hadn’t lost at home since Oct. 1, 2017, when the Carolina Panthers won 33-30 at New England. Since then, the Patriots won 21 consecutive home game, including playoffs.

Sunday's loss marked the Pats’ second straight defeat, and their third in five games since starting out 8-0 in defense of their latest Super Bowl championship.

The Chiefs dominated the game but the Patriots hung close and Brady had them on the cusp of the end zone when Bashaud Breeland batted away his fourth-down pass to Julian Edelman with just over a minute remaining.

New England also lost back-to-back games last December, when they came up short in Weeks 14 and 15. They wouldn’t lose again as they charged through the playoffs to claim their sixth Super Bowl championship.

The tense game led to a dustup in the fourth quarter.

Sammy Watkins and Stephon Gilfmore got into a tussle on the Kansas City sideline after one play. Gilmore was guarding the Chiefs receiver and they threw each other to the ground as they went over the sideline.

Watkins remained on top of Gilmore, and that led to some pushback. The referees and some other players came over to break it up before it got out of hand. 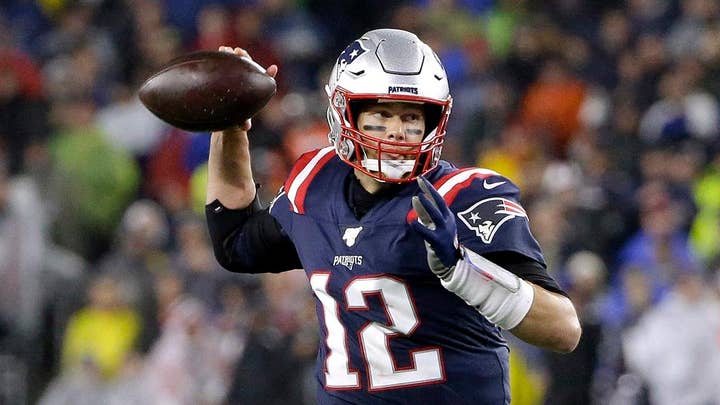 The Chiefs rebounded Sunday after an equipment fiasco nearly ended in disaster.

A container holding some of their team's shoulder pads, helmets and footballs was sent to Newark, N.J., by accident, but it safely arrived in Foxborough, Mass., after the team rushed it back to Boston for arguably its biggest game of the season.

Speculation about Brady’s future in the NFL has been swirling since he commented on the possibility of leaving the Patriots after the 2019 season.

Brady acknowledged in an interview on WEEI radio in October that he didn’t know what the future held for him. He said there will be a time where he has had “enough,” but those decisions will be coming at the “appropriate times.”

“That is the great part for me, I don’t know,” he said. “I think that has been a unique situation that I have been in because I think when you commit to a team for a certain amount of years you kind of feel like [there is] the responsibility to always fulfill the contract."