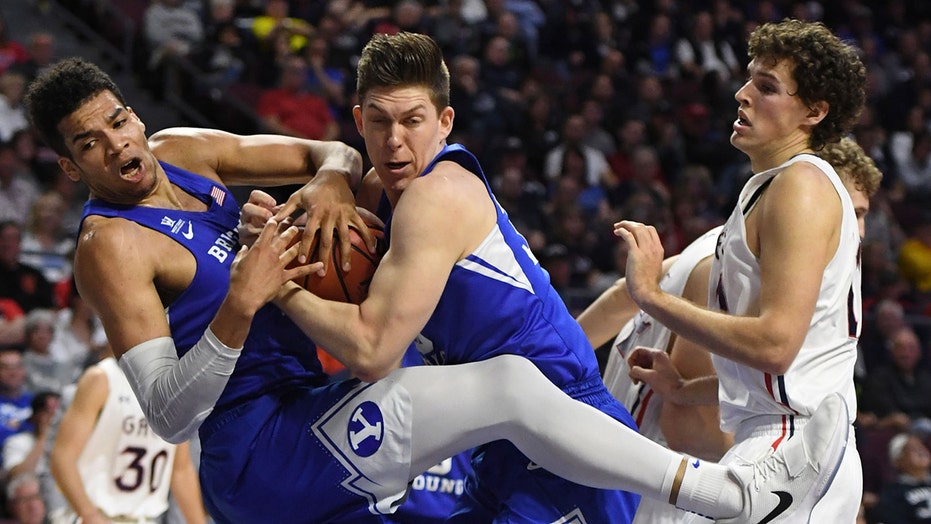 The NCAA on Friday suspended Brigham Young University men’s basketball player Yoeli Childs for nine games for failing to file the correct paperwork before he hired an agent to explore the possibility of entering the NBA Draft.

Childs ultimately did not enter the NBA Draft and elected to return to BYU for his senior season. But while he was mulling whether to turn pro, the Salt Lake Tribune reported that Childs hired an agent before he filed required paperwork, resulting in the suspension.

“I just want everyone to know that my intent was never to do something wrong,” Childs said in a statement, according to KSL-TV. “I was trying to do the right things; I was trying to do things the right way. I was going through this new process in the way I thought you were supposed to go through it.”

Yoeli Childs #23, left, and Dalton Nixon #33 of the Brigham Young Cougars both try to grab a rebound as Evan Fitzner #21 of the Saint Mary's Gaels looks on during a semifinal game of the West Coast Conference basketball tournament at the Orleans Arena on March 5, 2018 in Las Vegas. (Photo by Ethan Miller/Getty Images)

Childs said he still would have returned to the Cougars even if he was suspended for the season.

“If they said I couldn’t play the whole season, I would be here and be the greatest practice player ever,” he said. “I want to lead these guys as much as I can. I’m grateful to be here. I’m excited to go to Italy, to play in these preseason games. But these guys will be fine. We’re working so hard right now.”

Childs averaged 21.2 points and 9.7 rebounds per game for the Cougars last season.

BYU’s 2019-20 schedule isn’t set in stone just yet. According to the Salt Lake Tribune, the team will take part in the Maui Invitational starting Nov. 25.