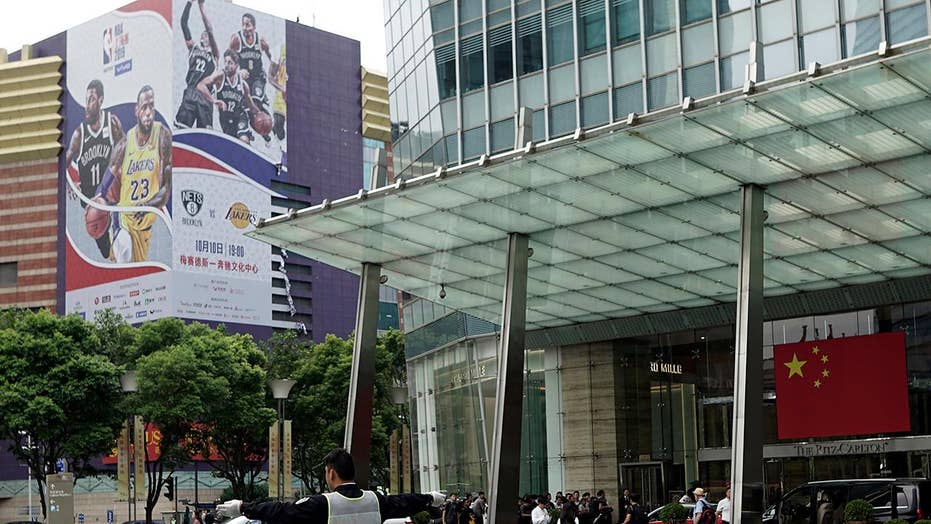 While the Chinese government continues its strict censorship of media interactions surrounding NBA exhibition games in the Communist country, league-linked entities have also taken steps to crack down on potential protests in the U.S.

The most glaring move so far occurred Wednesday night, when security at the Capital One Arena in Washington, D.C. confiscated pro-Hong Kong signage.

Several demonstrators supporting the ongoing pro-democracy protests in Hong Kong were in attendance during the Washington Wizards' preseason exhibition game against China's Guangzhou Long-Lions. The protesters, who said they were from Freedom House, held up signs that read: “Shame the NBA,” '”South Park was right” and “Memo to the NBA: Principles over profit! No censorship! USA loves Hong Kong.”

Activists hold up a sign before an NBA exhibition basketball game between the Washington Wizards and the Guangzhou Loong-Lions, Wednesday, Oct. 9, 2019, in Washington. (AP Photo/Nick Wass)

After the Chinese national anthem was played, one person shouted: “Freedom of expression! Freedom of speech! Free Hong Kong!” A second person also shouted for a free Hong Kong from the second level during the second quarter of the contest.

Security guards at the Capital One Arena then confronted a fan holding up a “Free Tibet” sign and another holding up the Tibet flag. Security tried to take the sign, but the fan resisted and they walked away from their seats and were followed by security.

A sign stating “Google Uyghurs” was also held up and then confiscated during the game. Jon Schweppe, who held the "Google Uyghurs" sign, tweeted a video showing it being taken away by a security guard. The Uyghurs are a Muslim ethnic group originating from Central and East Asia, with the largest population residing in China’s autonomous Xinjiang region. China has called the group a terrorist collective, which has given the government cause to treat the region like a surveillance state. Scores of Uyghurs have been placed in detention centers across the region.

“The building security staff removed signs tonight in accordance with Capital One Arena's long-standing signs, banners, posters and flag policy. No fans were asked to leave the game,” A Wizards spokesman said in a statement.

NBA IN CHINA: LAKERS, NETS SHANGHAI PRESEASON GAME TO HAVE NO MEDIA AVAILABILITY

More than a half-dozen protesters demonstrated inside the arena. They handed out “Free Hong Kong” T-shirts before the game. A Victims of Communism Memorial Foundation spokeswoman said the group was planning to hand out shirts inside the arena as well.

A similar scene unfolded during a Philadelphia 76ers game against Guangzhou on Tuesday night.

The NBA only prohibits “obscene or indecent messages on signs or clothing.” There are no hard and fast rules on political messages.

The protests come in the middle of a firestorm between the NBA and China over a tweet from Houston Rockets general manager Daryl Morey that read: “Fight for Freedom. Stand with Hong Kong.”

Though the tweet had been deleted, the NBA and the Rockets immediately began getting backlash. Several Chinese sportswear brands suspended ties with the Rockets.

Activists hold signs outside Capital One Arena before an NBA preseason basketball game between the Washington Wizards and the Guangzhou Loong-Lions, Wednesday, Oct. 9, 2019, in Washington. (AP Photo/Nick Wass)