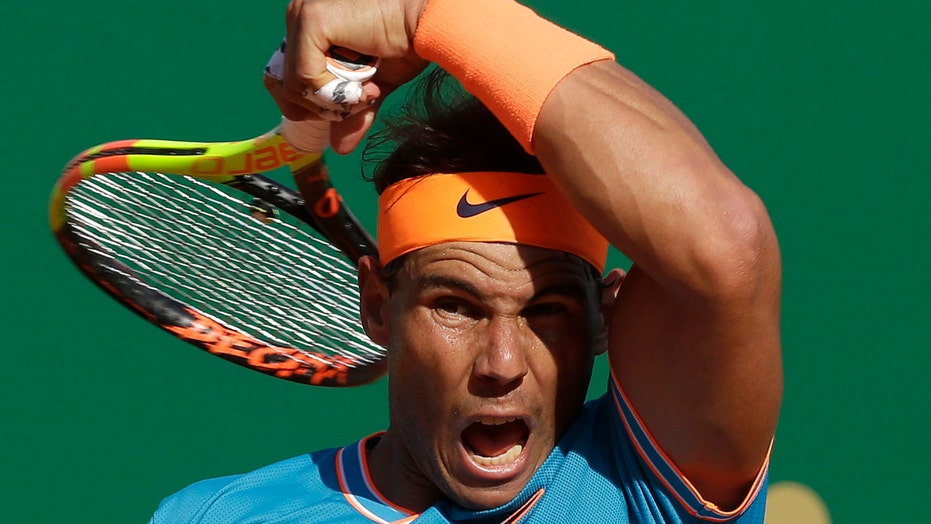 For all of the many qualities contributing to Rafael Nadal’s unprecedented superiority at the French Open — the bullwhip of a high-bouncing lefty forehand, the reflex returns, the cover-every-corner athleticism, the endless energy and grit — there’s one element that stands above all the rest.

According to the opponent Nadal beat in the last two finals in Paris, anyway.

“You go into the match knowing that even your best tennis, even if you play it over three, four hours, might not be enough. I mean, if you do it, you maybe have a little chance, but you have to go to your limit on every single rally, every single point,” Dominic Thiem, who won the U.S. Open less than two weeks ago, told The Associated Press.

“That makes it not easy to go into the match,” Thiem said. “And that’s the mental part, I guess.”

When main-draw competition begins Sunday at Roland Garros, Thiem and every other player in the men’s bracket will be pursuing Nadal as the 34-year-old from Spain pursues history.

If Nadal manages to claim a 13th French Open championship — extending his own record for the most singles trophies won by anyone at any major tennis tournament — he would, more significantly, also collect his 20th Grand Slam title overall, tying Roger Federer’s record for a man.

Asked recently about the possibility of catching the 39-year-old Federer, out for the rest of the season after a pair of operations on his right knee, Nadal expressed a sentiment he’s uttered before.

Climbing the Grand Slam list, Nadal said, is “not an obsession at all.”

“I know that you put a lot of attention on all of this,” he replied when the topic was raised last week at the Italian Open, Nadal’s first tournament since February because of the coronavirus pandemic.

“Of course I would love to finish my career with 25, but (that’s) something that probably will not happen. I’m going to keep fighting to produce chances, and then when I finish my career, let’s see, no?” he said. “I just want to keep enjoying tennis. And that’s it. If I am playing well, I know I normally have my chances. If not, going to be impossible. That’s it.”

There is, of course, another great of the game playing during this era and, like Nadal, gaining on Federer.

That would be No. 1-ranked Novak Djokovic, who had won five of seven major titles to raise his total to 17 before being disqualified at the U.S. Open for accidentally hitting a line judge with a ball while walking to a changeover.

In this oddest of years, the Grand Slam season will drawing to a close in France; the clay-court major was postponed from May until now because of the coronavirus pandemic.

“Roland Garros is the last Slam, the last opportunity of this season. So we all know who the main favorite is there: Obviously, it’s Nadal. And everything that he has achieved there, losing maybe a couple matches in his entire career on that court ... is probably the most impressive record that anybody has on any court,” Djokovic said. “So, yeah, of course you would put him right there in front as a favorite to win it.”

So what makes him so dominant there?

“He’s an unbelievably great tennis player. Probably on clay, a little bit better than on the other surfaces,” Thiem said. “He’s left-handed, which makes it very uncomfortable. And then his forehand, the topspin on the clay, it’s cruel to play.”

In Rome, for example, two-time Grand Slam champion Simona Halep and one of her coaches, Artemon Apostu-Efremov, caught one of Nadal’s training sessions.

“We were watching the way he hits the ball, the acceleration, the energy he has on the court and the way he practices 100%. It’s always an inspiration,” Apostu-Efremov said.

“This dedication on the court and focus on court,” he said, “it’s something that, for sure, could be transferred to Simona.”

Nadal wound up losing his third match in Italy, which is neither ideal form nor the sort of prep work he is accustomed to ahead of Paris.

Maybe he sensed that coming, because he talked before his loss about returning to “competition without big expectations.”

Still, Nadal at the French Open is unlike anyone else, anywhere else.

“Regardless of how he feels, I’m sure he’ll find a way,” said Stefanos Tsitsipas, a 2019 Australian Open semifinalist seeded No. 5 in Paris. “He always finds a way, every single year. Clay is his surface. I’m sure he’s going to do well.”