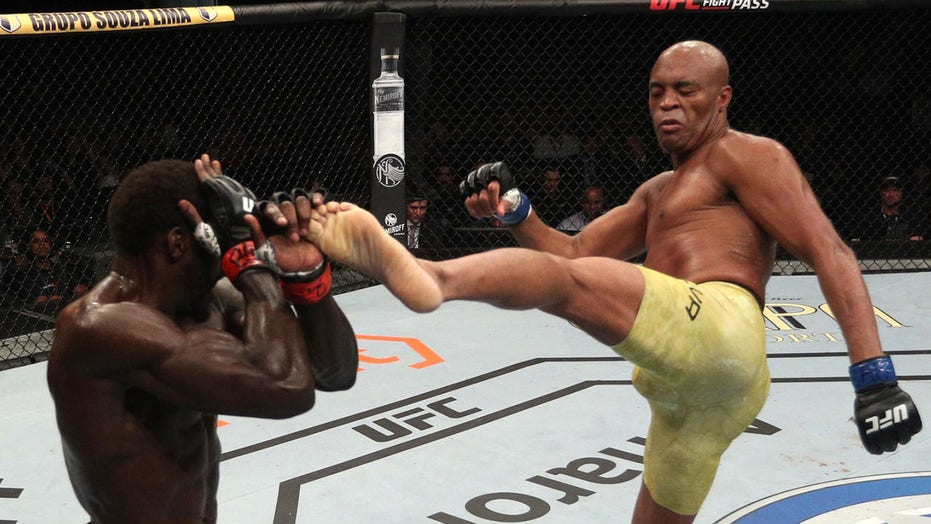 Silva, 44, his daughter Kaory, 23, and his son Kalyl, 20, took the oath of citizenship at the Los Angeles Convention Center along with 8,000 other people, most of whom came from Mexico, the Philippines or China. While Silva said he still respects his native Brazil, he told The Associated Press on Tuesday he feels he is fully an American now.

"I have my family in Brazil. I have my mom and my brothers in Brazil. But I think this is my country now," he said.

Mixed martial arts great Anderson "Spider" Silva of Brazil, center, his daughter Kaory, 23, left, and son Kalyl, 20, are is sworn in as a U.S. citizen along with thousands of others in a mass naturalization ceremony Tuesday, July 23, 2019 at the Los Angeles Convention Center. (AP Photo/Reed Saxon)

Silva was born in São Paolo, but he grew up 250 miles south in Curitiba, where he was in the care of his aunt and uncle. Before beginning his MMA career in 1997, Silva earned his paychecks working at a McDonald's, according to Bleacher Report.

The middleweight achieved success in the early 2000s and ran off 16 consecutive victories from 2006 to 2013, setting a record for the longest title reign by a UFC fighter. Silva is currently ranked 15th in the UFC middleweight rankings.

Anderson Silva of Brazil kicks Jared Cannonier in their middleweight bout during the UFC 237 event at Jeunesse Arena on May 11, 2019 in Rio De Janeiro, Brazil. (Photo by Buda Mendes/Zuffa LLC/Zuffa LLC via Getty Images)

Silva has lived in California for the past 10 years, and he said living in the United States gave him a better opportunity to provide for his family.

"I feel very happy, you know, it's a great moment for me and my family," he said. “Everything USA [gave] for us, it's time to give back, you know."

Mixed martial arts great Anderson "Spider" Silva of Brazil, center, his daughter Kaory, 23, right, and son Kalyl, 20, left, hold their citizenship documents after they are sworn in as U.S. citizens in a mass naturalization ceremony Tuesday, July 23, 2019 at the Los Angeles Convention Center. Joining them are family members who are not yet citizens, from left, daughter Kauana, 18; Joao, 14; and son Gabriel, 22, and Anderson Silva's wife Dayane. (AP Photo/Reed Saxon)

Silva's wife, Dayane, and three other children, Joao, 14, Gabriel, 22, and Kauana, 18, were also in attendance. That quartet is still going through the naturalization process.