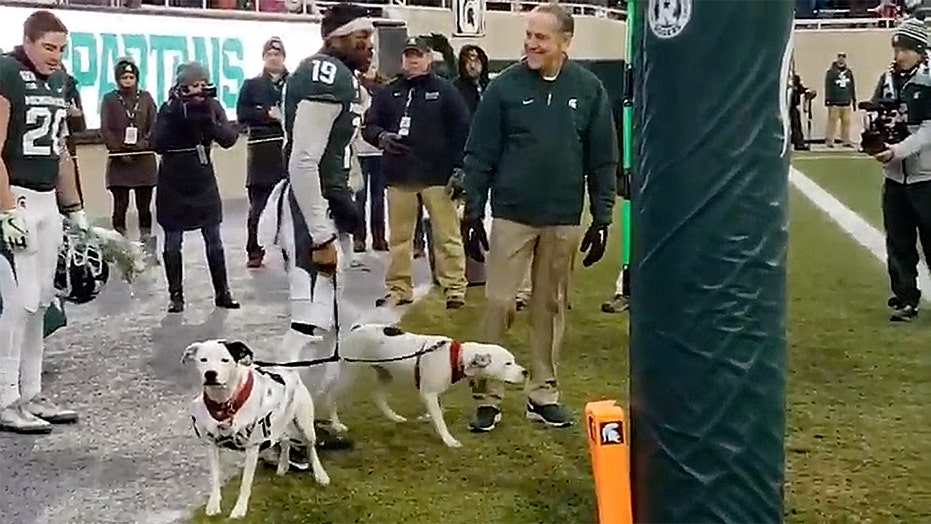 A Senior Day tradition before the Michigan State football game Saturday night featured two dogs that have helped cornerback Josh Butler cope with the death of his parents while he was in college.

Traditionally, during the pre-game introductions, Butler would have had his parents escort him on to the field for the last game of his college career.

Instead, he was accompanied by boxer and bulldog mixes Roxy and Remi before Michigan State played Maryland in East Lansing, Mich., according to The Washington Post.

Roxy and Remi accompany cornerback Josh Butler during Senior Day pre-game introductions at Michigan State Saturday night. Butler adopted the dogs after the loss of his parents in an 18-month span. (David Harns via Storyful)

“Definitely been a blessed journey since taking the greyhound bus as a kid all the way up to Michigan State, being able to prevail through losing my father in 2017, and seeing my mother pass away in my arms just this year in April from Cancer,” Butler said on Instagram. “It has strengthened me as a person, man of God, and leader.”

His father Steven Butler died of a heart attack or stroke in November 2017 just before Michigan State played Penn State and his mother Ladrida Bagely died of breast cancer 18 months later, according to Post.

He adopted Roxy and Remi as he grieved their deaths, according to the paper.

Butler told his Instagram followers that his next big step is earning his masters's degree in December.

“My dogs mean the world to me. Go Green,” he said.