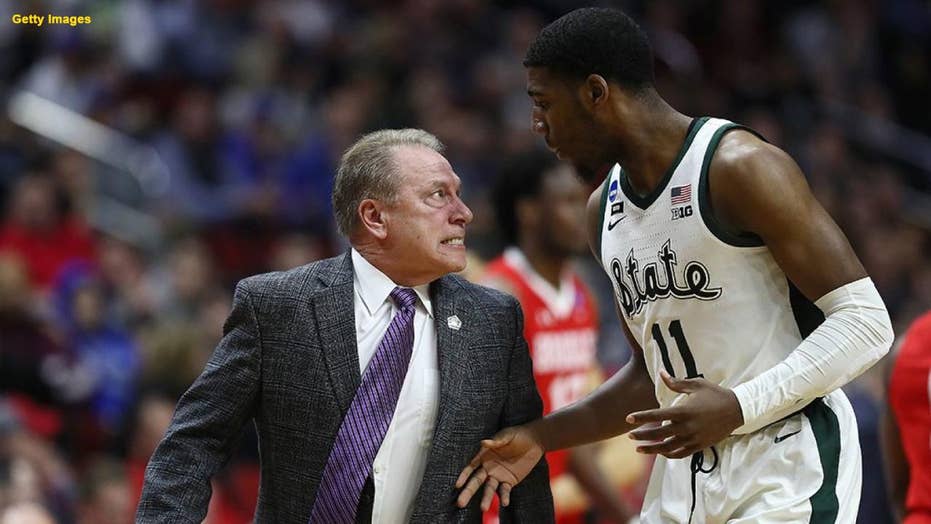 Head coach Tom Izzo of the Michigan State Spartans had to be restrained during their game in the First Round of the NCAA Basketball Tournament against the Bradley Braves. The Hall of Fame coach lost it while speaking to freshman forward Aaron Henry after a defensive lapse.

Izzo’s Spartans defeated Bradley 76-65, but it wasn’t all smooth sailing against the underdog Braves.

Early in the second half, the Hall of Fame coach lost it while speaking to freshman forward Aaron Henry after a defensive lapse by the young player.

Video from the game shows Izzo storming onto the court during a timeout and shouting at Henry. Other coaches and guard Cassius Winston quickly stepped in to separate the two, before the chewing out continued in the team huddle.

While sitting in a circle with his team, Izzo made a “little lunge” toward Henry before other players again helped calm him down.

On commentary, former NBA star-turned-broadcaster Reggie Miller described Henry as looking “a little perplexed” by the situation before footage of the huddle was shown and adding: “You see the little lunge there by Izzo, and you see the players getting between. Emotions are high.”

Speaking after the game, Izzo explained he was upset with Henry for not getting back on defense.

“I did get after him. He did respond. He did make a couple of big buckets. He did make some big free throws, but that's not good enough. It's one-and-done time. The 'my-bads' are out the window,” he told ESPN.

OPINION: MARCH MADNESS IS HERE, AND IT'S TIME FOR GAMBLERS TO START PAYING TAXES ON THEIR WINNINGS

Henry also seemed unphased by the tongue-lashing after the game, saying he understood where his coach was coming from.

“Just responding to it is accepting the coaching and not having a pity-party for yourself and just being a basketball player and go respond,” he told the Detroit Free Press. “It’s been a minute since he chewed me out, because I haven’t played this bad in a while. It’s once every blue moon, I feel like. So I have to be better Saturday.”

Michigan State plays Minnesota in the second-round of the tournament on Saturday.