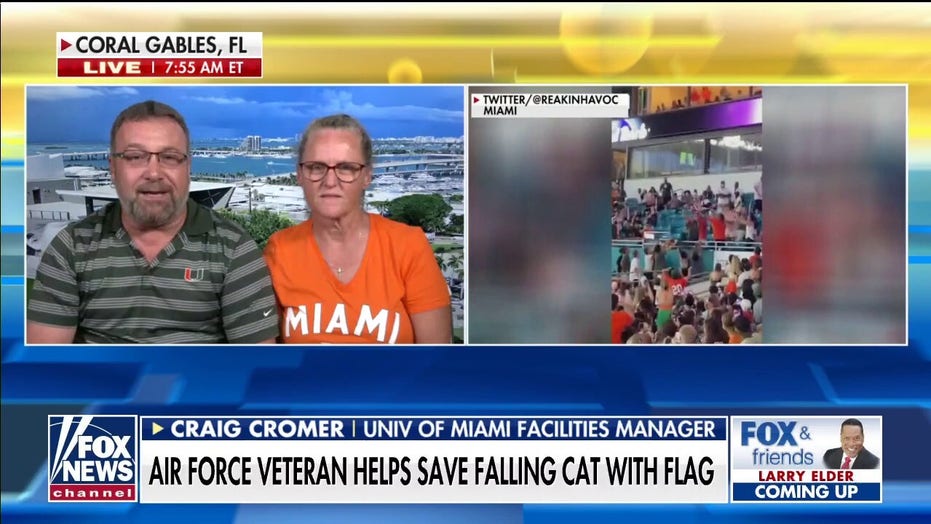 Craig and Kimberly Cromer join 'Fox & Friends' to explain what happened and why they bring an American flag to every game.

The Miami couple who helped save a cat by using their American flag as a safety net told local media that they bring the flag to every Hurricane home game they attend in Hard Rock Stadium.

"My wife takes the U.S. flag with us to all of our football games, and we normally Zip-tie it to the handrail, and so we snatched it off the handrail and used it to break the cat’s fall," Craig Cromer told WSVN.

Cromer, a 21-year U.S. Air Force veteran, and his wife Kimberly spoke about the "eventful" night on "Fox & Friends" Monday.

"My wife and I looked up and we could see the butt of a animal, we couldn't tell what kind it was," Cromer said. "I think it was trying to be saved from up above, which was actually driving it further down. They couldn't reach it. And the students were very passionate about, you know, saving the cat."

Footage showed the cat dangling about 50 feet in the air -- on the side of a balcony. The cat eventually fell and -- much to the crowd's delight --landed in an extended American flag below. The crowd erupted as though the Hurricanes connected on a game-winning drive.

Kimberly Cromer said she didn't know where the cat came from or how it got to the balcony during the game but it was wearing a collar.

The WSVN report said the cat eventually left the venue with a woman on Saturday night.