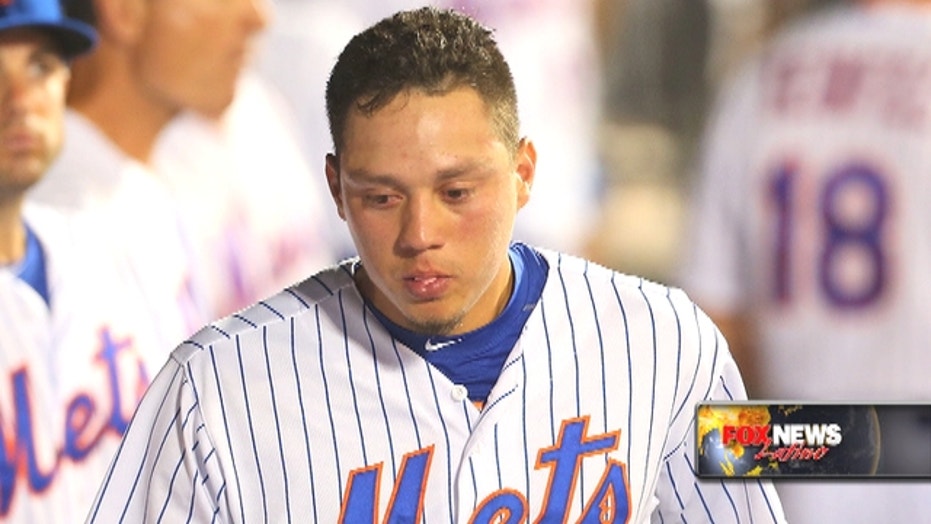 Wilmer Flores wiped away tears during the game

Wilmer Flores wiped away tears as he warmed up at shortstop for the eighth inning, thinking he was being traded from the organization he joined as a teenager.

NEW YORK (AP) – Wilmer Flores wiped away tears as he warmed up at shortstop for the eighth inning, thinking he was being traded from the organization he joined as a teenager.

Manager Terry Collins left the rookie out there. He was trying to win a game and had no idea why Flores was crying.

It turned out Flores became emotional over a rumor: General manager Sandy Alderson said there was no trade after the New York Mets lost 7-3 to the San Diego Padres on Wednesday night despite three homers from a suddenly hot Lucas Duda.

"You think these guys are stone-cold robots. They're not," Collins said. "They're human beings and they have emotions."

Word spread throughout Citi Field in the middle innings about a deal that would've brought Carlos Gomez to the Mets from Milwaukee. Flores was one of the players included in the tweets and internet chatter about the trade.

When Flores came to bat in the seventh fans gave him a standing ovation that in the context of the game was unusual — the Mets were trailing 7-2 and there was no one on base.

"It was a little bizarre from inning three to inning eight," Alderson said.

When he came out to shortstop for the top of the eighth, Flores began to cry as he warmed up. His eyes were watery and red after the game, too, even though Alderson had apologized to Flores.

"During the game I heard there was a trade and I got emotional," Flores said. "I heard from the fans. When I came up to hit I heard everybody cheering. ... It was difficult."

Generally when a player is traded mid-game, he is pulled. Collins sent Flores back out to his position because he was not informed of any swap.

"There is no trade," Alderson said. "Unfortunately social media, etc., got ahead of the facts and it may have had an adverse affect on one of the players rumored to be involved. It was an unfortunate situation."

After six straight losing seasons, the Mets are in a pennant race. The loss snapped a three-game winning streak and dropped New York two games back of Washington in the NL East.

The Mets quickly fell behind in this one.

Justin Upton homered and drove in three runs and Yonder Alonso also connected for the Padres. Matt Kemp, Yangervis Solarte and Will Venable all drove in early runs as San Diego chased Bartolo Colon (9-10) after only 2 1-3 innings, his shortest start since 2012.

Solarte doubled twice and matched a career high with four hits as the Padres won for the seventh time in 11 games since the All-Star break.

"It makes it really helpful," Padres manager Pat Murphy said of Alonso and Solarte. "We have asked Kemp and Upton to provide all the wins for us lately, and it's great to see that those guys are performing."

Duda hit the first of his home runs leading off the second to end Tyson Ross' streak of starts without allowing one at 16, a Padres record. Ross (7-8) hadn't given up a homer since April 28, a span of 100 innings.

Duda also connected in the sixth off Kevin Quackenbush and in the ninth off Marcos Mateo. Duda has six homers in the last four games after going through an extended slump.

"We've been saying all year long. He's one of the guys in the lineup we said he's going to get it going," Collins said. "Last year when he finally got the job he was just doing OK and all of a sudden he took off, and that's what we're seeing now. He's a guy that's locked in."