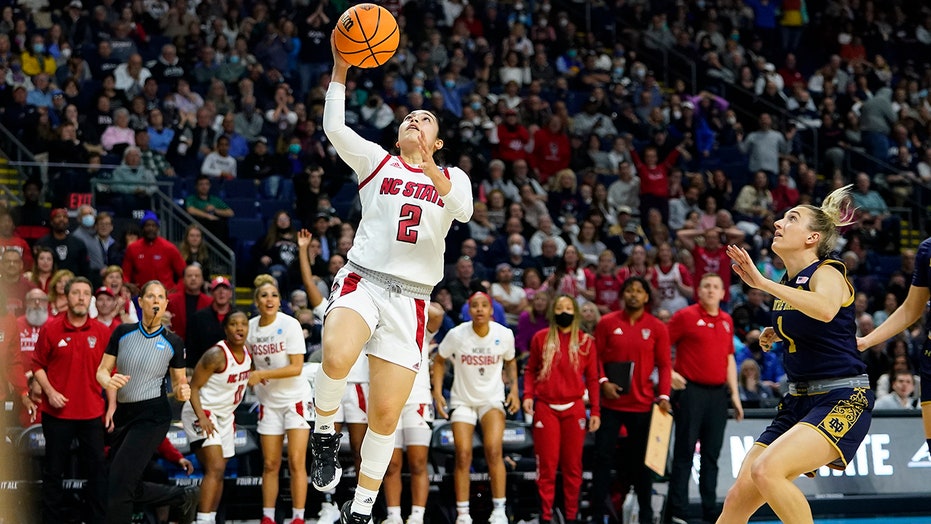 Raina Perez decided to come back for one more season and hopefully lift N.C. State to new heights. The senior guard did just that, helping the Wolfpack advance to their first regional final in 24 years.

The senior guard stole the ball at midcourt and made a go-ahead layup with 14 seconds left to send the top-seeded Wolfpack to a 66-63 comeback win over No. 5 Notre Dame on Saturday.

It’s the Wolfpack’s first trip to the Elite Eight since 1998, when they reached the Final Four.

North Carolina State guard Raina Perez goes to the basket for a shot against Notre Dame in the Sweet Sixteen round of the NCAA women's tournament, Saturday, March 26, 2022, in Bridgeport, Conn.  (AP Photo/Frank Franklin II)

N.C. State had lost in the Sweet 16 the previous three tournaments and looked as if it was going to make it four straight until the late rally led by Perez and Kai Crutchfield, who also came back for the extra COVID year granted by the NCAA.

"For this group it would have been hard for me to face the fact they all came back and we still didn't get over the hump," N.C. State coach Wes Moore said. "That makes me feel really good and I'm so excited for our program to do this, kind of break through. It took a while, four years of the Sweet 16, to get through that wall."

It wasn't the first time that Perez came up huge for the Wolfpack on a big stage. She hit the game-winning jumper to lift them to the ACC tournament championship last season.

Trailing 59-51 early in the fourth quarter, the Wolfpack rallied, scoring 15 of the final 19 points capped by Perez’s layup. The Irish had one last chance, but Maddy Westbeld missed a 3-pointer from the wing and Perez hit both free throws for the final margin.

"We practice this and knew I could do it," Perez said of the free throws. "I’m just so happy I knocked them down."

The Wolfpack had gotten within 63-62 when Elissa Cunane made the first of two free throws with 36 seconds left. After a Notre Dame timeout, the Irish got the ball inbounds in the backcourt and Dara Mabrey was stripped near midcourt by Perez, who took it in for the layup and the lead. It was their first since the 7:43 mark of the second quarter.

N.C. State (32-3) advanced to the regional final Monday night where it will face second-seeded UConn.

Cunane scored 16 points and Crutchfield added 14 for the Wolfpack, who avenged an earlier loss to the Irish on Feb. 1. That was N.C. State's most recent loss of the season and only defeat in conference play.

"It’s a hump we had to get over and the girls are determined and I’m determined and we made it happen." said Crutchfield of reaching the regional final.

"No one thought that we’d do this coming from a team that did not make the tournament last year and fought through a lot of adversity with COVID and injuries and players," Miles said. "It’s just incredible to see what we’ve done, and I’m sure we’re going to remember this feeling like we remembered the feeling last year and come back and go even farther."

Notre Dame coach Niele Ivey has the Irish back among the nation’s elite women’s basketball teams in her second season as head coach. The Irish missed the NCAAs last year for the first time since 1995.

"I wanted to stress that to them, that I don’t want them to feel this is the end of the world," Ivey said. "We have a bright future, starting two freshmen and a sophomore."

The Wolfpack got off to a decent start and led 16-12 after one quarter before the Irish got going behind their freshman Miles. She and fellow first-year player Sonia Citron scored seven straight for the Irish to open up a 36-26 lead. The Wolfpack trailed 38-30 at the half. The lead stayed around eight for most of the third quarter before the rally by N.C. State.

"The whole game we didn’t want to happen what did last year," Cunane said. 'We’re playing right now like the upset we had last year. We weren’t playing with enough toughness. We wanted to come out here and go past the Sweet 16 and here we are. We had to work hard for it but we are here."

Notre Dame: The Irish are a very young squad and are headed back to being one of the top teams in the country.

N.C. State: The Wolfpack struggled most of the game, but found a way to win in the end and reach the Elite Eight with a senior-led squad.

HOW THEY GOT HERE

Notre Dame: The Irish topped UMass in the first round before routing fourth-seed Oklahoma 108-64 in the second.

N.C. State: The Wolfpack routed both Longwood and Kansas State to advance to the Sweet 16.

It was a rough 24 hours for the Ivey family on the court. Niele Ivey made the 2.5-hour trip down from Connecticut to Philadelphia to watch her son Jaden play in the men’s Sweet 16 with Purdue. The Boilermakers lost to No. 15 seed Saint Peter’s. She went to the team hotel and gave her son a hug before returning to Connecticut around 2 a.m.

"It's been a tough 24 hours," the Notre Dame coach said after Saturday's loss.