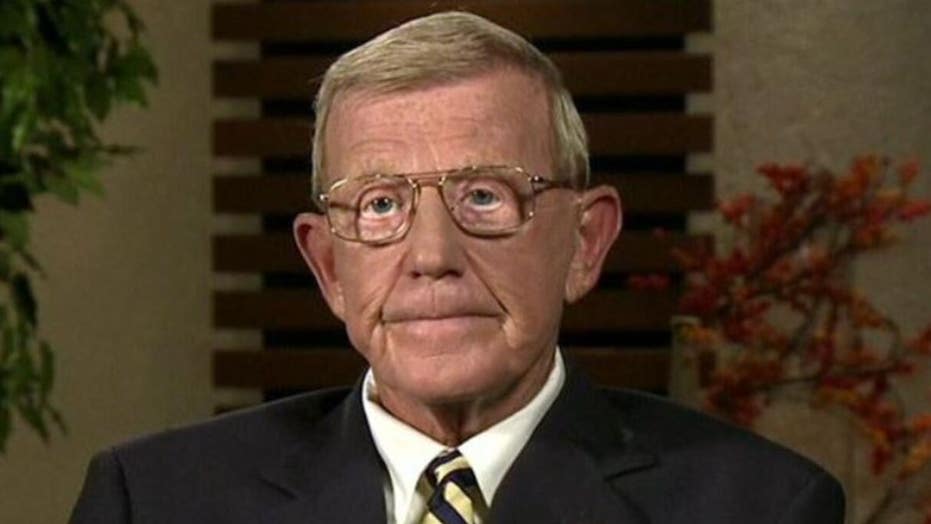 Legendary college football coach Lou Holtz refused to back down on Friday when asked about Notre Dame's reaction to his criticism of Democratic presidential candidate Joe Biden's Catholic faith.

In remarks at the Republican National Convention Wednesday night, Holtz had called Biden "Catholic in name only," citing the former vice president's position on abortion.

In response to Holtz's remarks, University President Fr. John Jenkins issued a statement saying that the former Fighting Irish coach's "use of the University’s name at the Republican National Convention must not be taken to imply that the University endorses his views, any candidate or any political party."

Jenkins added that "we Catholics should remind ourselves that while we may judge the objective moral quality of another’s actions, we must never question the sincerity of another’s faith, which is due to the mysterious working of grace in that person’s heart. In this fractious time, let us remember that our highest calling is to love.”

"When he said that you can abort a baby at the nine month of ... pregnancy, and that's perfectly all right?" Holtz asked Hemmer. "No, by the way I was taught, the Catholic Church, that's not all right and I'm going to speak up about it."

It's unclear when Holtz saw Biden say he supported abortion in the ninth month of pregnancy, but anti-abortion advocates have contended that the Democratic ticket's proposed policies would effectively lead to that.

Fox News has previously reported on how anti-abortion Democrats criticized the party's platform for its allegedly radical policies.

When Fr. James Martin, a Jesuit priest, prayed at the Democratic National Covnention, he included a subtle jab at the party's abortion policies by praying for the sanctity of unborn life.

In the Catholic Catechism, abortion itself -- described as "gravely contrary to moral law" -- is classified as a violation of the Fifth Commandment against killing. Catholic clergy have repeatedly condemned both the act itself and abortion-rights political advocacy. Vatican officials have reportedly said House Speaker Nancy Pelosi, D-Calif., should be denied the sacrament of Holy Communion and the last pope -- Pope Benedict XVI -- personally reminded her of the Church's stance on the issue during a private meeting.