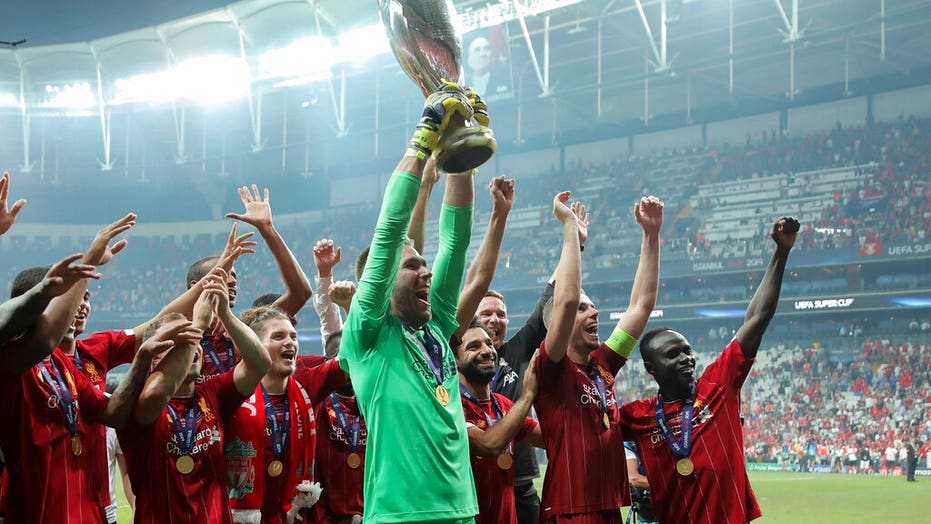 Liverpool goalkeeper Adrian, fresh off a European Super Cup victory over Chelsea, may miss the club’s second English Premier League match of the season because of a bizarre injury suffered following his penalty shootout heroics.

Adrian was among the players celebrating Wednesday after he made the key save in the shootout against Chelsea to clinch the trophy when a pitch invader attempted to join in the fun.

The fan slipped as he was grabbed by a security guard and collided with several Liverpool players. Adrian injured his ankle in the process.

Liverpool's goalkeeper Adrian lifts up the trophy as he celebrates with players after winning the UEFA Super Cup soccer match between Liverpool and Chelsea, in Besiktas Park. (AP)

"It was a strange, weird situation because we were celebrating between us and one guy jumped from the crowd and started running,” Adrian told the club’s website Friday. “I think he slipped in front of us and also the security with him and made me a tackle from the side. It was a bit of a strange situation but I feel much better today and I hope [I'm] ready for tomorrow.”

Adrian was optimistic about his chances of starting against Southampton.

“I feel mentally ready and I also hope today with the treatment of the ankle it's going to be much better,” he said. “But I'm very optimistic to start playing tomorrow again.”

The Spanish keeper joined Liverpool from West Ham United on a free transfer days before the start of the season as backup to first-choice goalie Alisson. But he was unexpectedly thrust into action during Liverpool's opening day victory over Norwich City in the English Premier League when the Brazilian injured his calf.