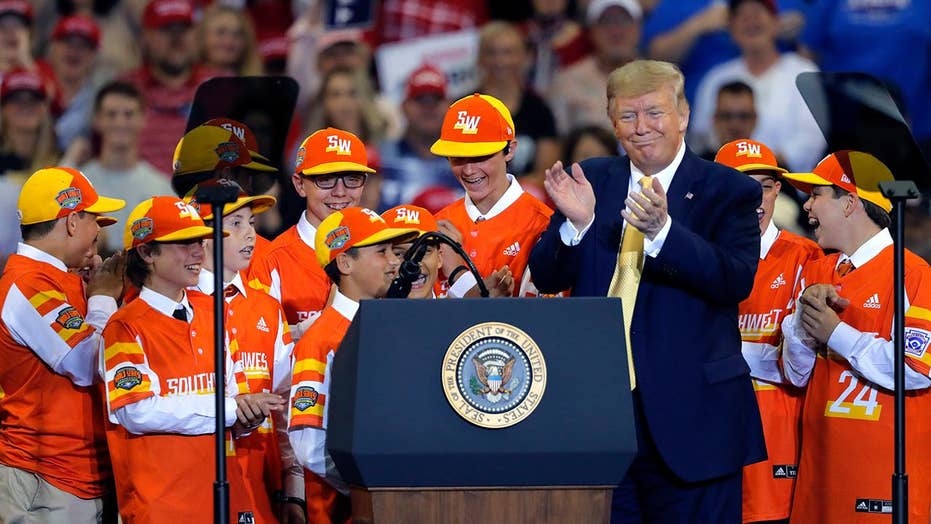 The Eastbank All-Stars from Louisiana flew back to their home state aboard Air Force One with Trump and were honored by the president at the 'Keep America Great' rally in Lake Charles.

The 2019 Little League World Series champions went back home to Louisiana in style after they accepted a last-minute invitation Friday to fly aboard Air Force One with President Trump.

The Eastbank All-Stars were visiting Washington, D.C., following their 8-0 victory over Curacao in August to clinch the baseball title, Politico reported. The team took a tour of the Capitol in a visit hosted by Republican Rep. Steve Scalise of Louisiana, who serves as the House minority whip.

President Trump board Air Force One with the champs on Friday. (AP Photo/Kevin Wolf)

The Louisiana players met with Trump at the White House and again at Andrews Air Force Base in Maryland. Trump was heading to Lake Charles, La., to galvanize Republicans in a bid to keep Democratic Gov. John Bel Edwards from winning a second term.

During the visit, Trump invited the team to hitch a ride aboard the aircraft.

Scalise tweeted about the invitation, alongside a photo of himself and the players.

“The champs are flying back to Louisiana on Air Force One with @realDonaldTrump after celebrating their Little League World Series Championship victory at The @WhiteHouse! “What an amazing day! I’m so proud of this team!” he added.