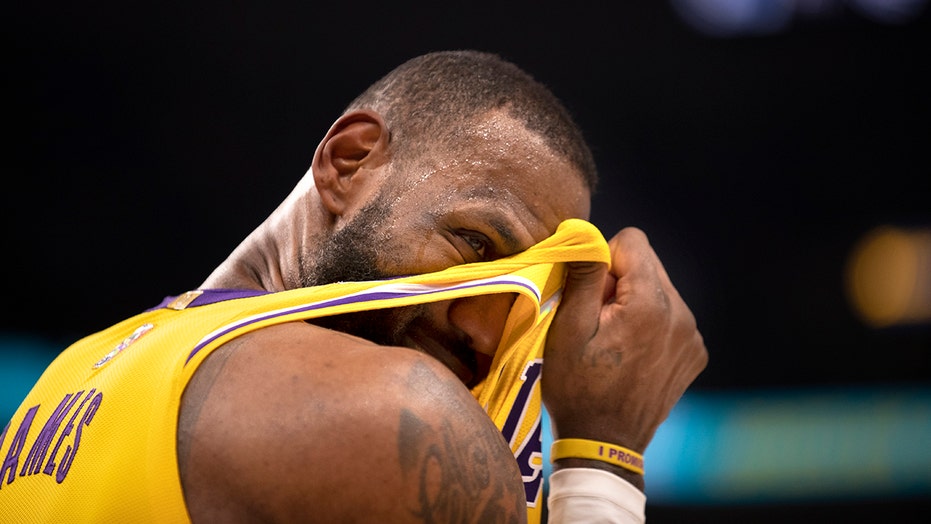 LeBron James is one of the few remnants left from the previous generation of NBA basketball. Probably its most important.

On the eve of the Lakers forward’s 37th birthday (Dec. 30), all eyes and ears shift lean toward James regarding his eventual retirement — barring a Brady-like objective to play until he’s 50.

When he finally chooses to lace up his sneakers and retire, James said it’ll come down to a consensus between mind and body.

Los Angeles Lakers forward LeBron James talks to teammates during the first half of an NBA basketball game against the Houston Rockets, Tuesday, Dec. 28, 2021, in Houston. (AP Photo/Eric Christian Smith)

"I know I’m on the other side of the hill, compared to the hill I was on before. I know that," James noted, following a Tuesday night win against the Rockets. "But, I mean, I’ve thought about it, where I’m at with it. I’m still playing at such a high level, I haven’t given it too much thought."

He added, "But I’m in Year 19, and I’m not gonna do another 19, so I’m definitely not halfway in my career. I’m on the other side of the hill. So, we’ll see where the game takes me. We’ll see where my body takes me and my mind. As long as my mind stays fresh and my body stays with that, I can play the game."

Los Angeles Lakers forward LeBron James #6 reacts during the first half against the Memphis Grizzlies at FedExForum on December 29, 2021 in Memphis, Tennessee. (Justin Ford/Getty Images)

In past seasons, James’ commitment to go full speed throughout the year has been questioned. As for his 19th season, the narrative following James’ effort has enveloped a different message.

On Tuesday night, James experimented as the team’s starting center — a position he’s previously appeared in but never started for any of his previous squads.

The switch paid off for the Lakers and interim head coach David Fizdale — coaching in the absence of Frank Vogel, currently in the NBA’s health and safety protocols.

Los Angeles has yet to play like a playoff contender after 35 games (17-18) and is slated as the seventh seed in the Western Conference. As LeBron’s clock keeps ticking, so does the timer on the Lakers’ legitimacy since their 2020 championship.

Los Angeles Lakers' LeBron James smiles as he makes his way down the court during first half of an NBA basketball game against the San Antonio Spurs Thursday, Dec. 23, 2021, in Los Angeles.  (AP Photo/Jae C. Hong)

Check out how OutKicker founder Clay Travis and James recently came together as "best friends."