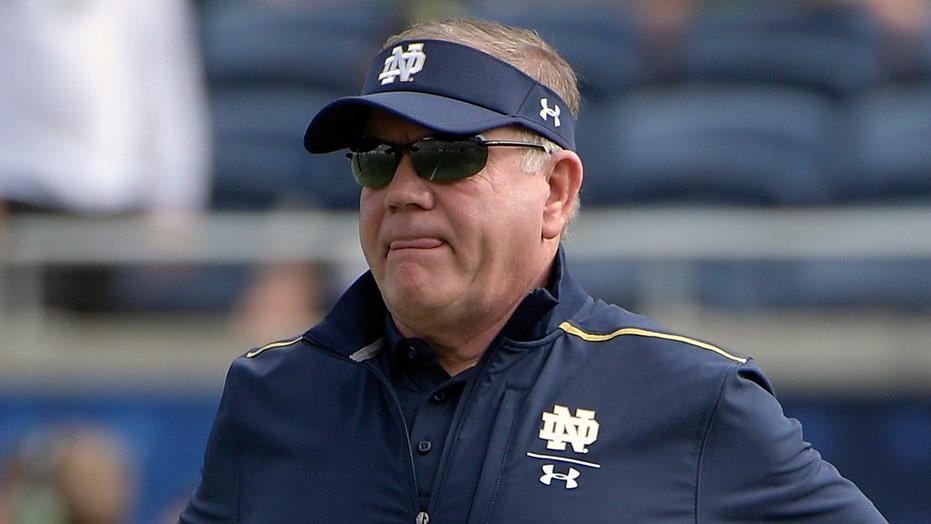 Brian Kelly already knows the outcome of Notre Dame’s next football game. It’s the rest of the schedule that matters as the Fighting Irish try to end a national championship drought that dates to 1988.

“In spring practice we’re not out to win – we’ve already won the spring game,” Kelly said Wednesday following the first of 14 practices ahead of the annual Blue-Gold Game on April 18.

Kelly watched his 11th Notre Dame team go through a pad-less, 2¼-hour morning workout inside, told his staff and players he liked what he saw, and then dismissed them for 12 days because of spring break.

“We practiced the right way today,” Kelly said. “The pace, the competitiveness … it doesn’t get much better than that for a first-day practice. There was a high level of execution and there was really good tempo to the practice. Got a lot of work done technically and tactically. We took a good step forward in the construction of this team.”

Workouts resume March 17 for the Irish, who open their 2020 season Aug. 29 in Dublin, Ireland, against Navy.

Kelly’s Fighting Irish finished the 2019 campaign 11-2 and ranked No. 12. It continued a three-year resurgence for Kelly’s program following a 4-8 disaster in 2016. Since then, Notre Dame is 33-6, including a 12-0 regular season in 2018 that earned the Irish a College Football Playoff berth.

Following a bowl victory, Kelly hired veteran assistant John McNulty as tight ends coach and Mike Mickens, an All-American under Kelly at Cincinnati, to tutor the cornerbacks. He told both what he expected from them.

“(Be) demanding but not demeaning,” Kelly said, “clearly understanding that our guys have high expectations and they you are to meet those with your preparation, your teaching and your ability to motivate our players to the levels necessary to be at the championship level. So setting those standards and then, obviously, teaching the fundamentals. This is about technique.”

Techniques are most often taught, developed and improved in the spring, and no player is exempt, including fifth-year quarterback Ian Book, who leads an offense that returns its entire line but needs to replace tight end Cole Kmet and wide receiver Chase Claypool.

The 6-foot, 206-pound Book, a graduate student who has thrown for 6,118 yards and 57 touchdowns and run for 1,033 yards and eight scores, has won 19 of the 22 games he has started under Rees’ tutelage and was a captain last fall. Kelly was impressed how Book finished the season.

“He doesn’t really need to walk around and scream and yell,” Kelly said. “He’s got a presence about him. He just needs to be Ian Book and complete a (expletive) of passes.”