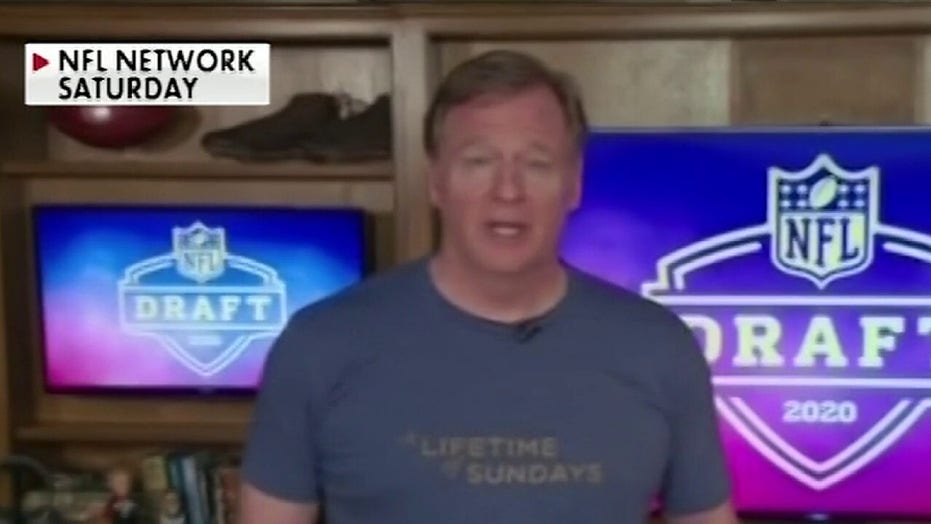 It’s never too early to look ahead at the favorites to take home the NFL’s Offensive Rookie of the Year award.

Three quarterbacks were drafted in the top 10 of the 2020 NFL Draft, including LSU’s Joe Burrow, who went No. 1 overall to the Cincinnati Bengals; Alabama’s Tua Tagovailoa, who went No. 5 to the Miami Dolphins, and Oregon’s Justin Herbert, who was drafted one pick later to the Los Angeles Chargers.

It was also the deepest wide receiver class in recent memory. As many as six wide receivers were taken in the first round, which included Alabama’s Henry Ruggs III, who was the first wideout off the board when he was taken by the Las Vegas Raiders at No. 12 overall.

Here are the top five favorites for Offensive Rookie of the Year honors.

Joe Burrow, the No. 1 overall pick of the 2020 NFL Draft, is the favorite to take home the NFL Offensive Rookie of the Year award. (AP Photo/David J. Phillip)

Burrow, the No. 1 overall pick in the 2020 NFL Draft, is also the clear-cut favorite to take home the Offensive Rookie of the Year award. The LSU-product is expected to start under center from day one, taking over the reins of a new era in Cincinnati.

Burrow, the 2019 Heisman Trophy winner, had one of the best seasons in college football history his senior year. He led the nation in passing yards (5,671), total offense (6,039 yards), completion percentage (76.3) and set an NCAA record with 60 touchdown passes in 15 starts.

Tua Tagovailoa, the No. 5 overall draft pick by the Miami Dolphins, has the second-best odds to win Offensive Rookie of the Year. (AP Photo/Sam Craft)

Tagovailoa is a risky one here simply because he may not start right away for the Miami Dolphins. Despite only starting nine games during his junior year at Alabama, he managed to throw for 2,840 passing yards and 33 touchdowns. Tagovailoa was awarded the Maxwell Award and Walter Camp Player of the Year award in 2018, along with SEC Offensive Player of the Year and second-team Associated Press All-American honors.

Tagovailoa is obviously the future of the franchise, but with veteran quarterback Ryan Fitzpatrick still on the roster, the Dolphins can take their time with their most prized possession, and their best quarterback draft pick since Dan Marino in 1983.

The unanimous No. 1 draft selection in fantasy football rookie drafts, Edwards-Helaire is stepping into a situation where he will succeed from day one. Andy Reid has a history of drafting productive running backs, a list that includes: Duce Staley, Brian Westbrook, LeSean McCoy, Jamaal Charles, and Kareem Hunt during his time with the Philadelphia Eagles and Kansas City Chiefs. According to Fantasy Index, the average production for Reid’s running backs in a single season is 1,410 total yards (939 rushing, 471 receiving) with 9.5 touchdowns.

Now, enter Edwards-Helaire, who had a phenomenal junior season at LSU with quarterback Joe Burrow. He rushed for 1,414 yards and 16 touchdowns on 215 carries, which is good for a 6.6-yard per carry average. He was also a fantastic receiving option. Edwards-Helaire had 55 receptions for 453 yards and a score, and as a kick returner, he had 10 returns for 214 yards.

CeeDee Lamb, a consensus All-American, was a finalist for the Biletnikoff Award and the Earl Campbell Tyler Rose Award. He had 62 receptions for 1,327 receiving yards with 14 touchdowns, which was tied for fifth in the nation, during his junior season at Oklahoma.

Lamb leaves Oklahoma with a host of accomplishments.

Lamb will join an offense with the Dallas Cowboys that features quarterback Dak Prescott, running back Ezekiel Elliott, and wide receivers Amari Cooper and Michael Gallup. He will be put in a position to succeed immediately, and the numbers will show on the state sheet right away.

The Detroit Lions drafted running back D'Andre Swift in the second round of the 2020 NFL Draft. (Photo by Kevin C. Cox/Getty Images)

D’Andre Swift has some large shoes to fill. He may be the best running back the Detroit Lions have drafted since they took a guy by the name of Barry Sanders out of Oklahoma State in the 1989 NFL Draft with the No. 3 overall pick.

Swift, the Georgia-product, played in all 14 games in 2019. He totaled 1,216 rushing yards and seven touchdowns. The Bulldogs narrowly missed going to the national championship game and had to settle for the Sugar Bowl where they beat Baylor.

Swift ended up being an early second-round selection, and was the No. 2 running back off the board. He will enter the NFL with a bit of a chip on his shoulder after dropping in the draft. Expect Swift to take over in the backfield right away.