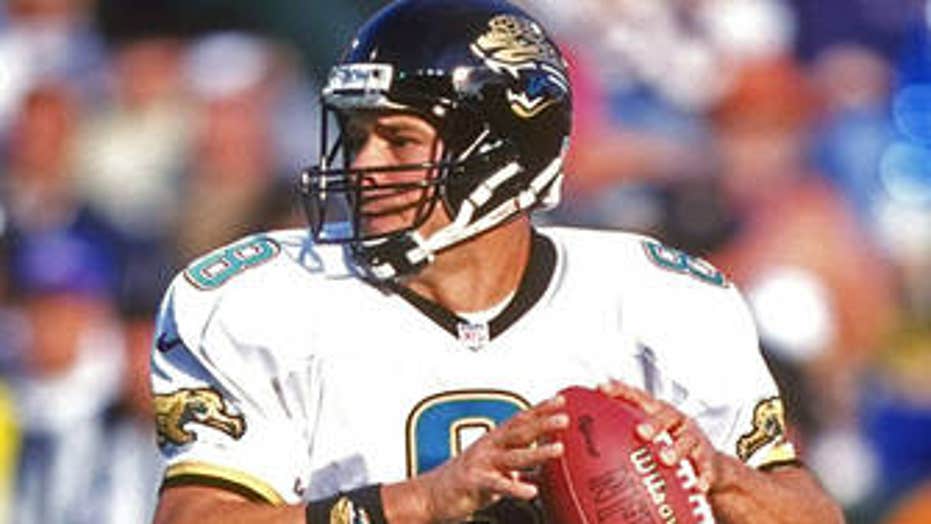 The Jacksonville Jaguars came into the NFL as an expansion team in 1995 and under Tom Coughlin turned into an immediate threat in the AFC.

In the Jaguars' second season, the team made the AFC title game only to lose to the New England Patriots in 1996, and later losing to the Tennessee Titans in 1999. Jacksonville was in the playoffs four times in its first five seasons of the team's existence.

The team has won three division titles since 1995 but has never made the Super Bowl.

The Jaguars featured some of the best players in the NFL. But who would be on the franchise’s Mount Rushmore of players?

Mark Brunell was a top quarterback for the Jaguars. (Getty Images)

Mark Brunell joined the Jaguars in 1995 and started 13 games for them. He is the most successful quarterback in Jaguars history, earning three Pro Bowls during his time there.

The main reason for his success was mostly because of the players also included on this Mount Rushmore.

Fred Taylor was a fearsome running back during his career. (Getty Images)

The Jaguars selected Fred Taylor with the No. 9 pick of the 1998 draft. He spent 11 years in Jacksonville and was among the top running backs in football for quite some time.

In his rookie season, Taylor ran for 1,223 yards on 264 carries. He also scored 14 touchdowns. His dominance would continue throughout his time in Jacksonville. He ran for 11,271 yards with 62 touchdowns over those 11 years. He ran for more than 1,000 yards seven times in his career.

Surprisingly, Taylor only made one Pro Bowl appearance -- in 2007. That year, he had 1,202 rushing yards and five touchdowns.

Tony Boselli was one of the best linemen in the NFL. (Photo by Logan Bowles/Getty Images)

The reasons behind Jacksonville’s early success as a franchise starts with Tony Boselli.

Boselli is among the greatest offensive linemen in NFL history despite only playing seven seasons. He appeared in 91 games for the Jaguars before he was selected by the Houston Texans in their expansion draft. He made the Pro Bowl five times and was a First-Team All-Pro selection three times.

He was forced to retire early due to injuries.

Jimmy Smith is the best wide receiver to come through the Jaguars' franchise. (Reuters)

Jimmy Smith is arguably the greatest player in Jaguars’ franchise history. He was with the Jaguars from 1995 to 2005 before retiring.

He was a five-time Pro Bowler, earning all the selections as a member of the Jaguars. He made 862 passes for 12,287 yards with 67 touchdowns.

He led the league in 1999 with 116 receptions. He earned more than 1,000 yards receiving nine out of the 11 years he was with Jacksonville