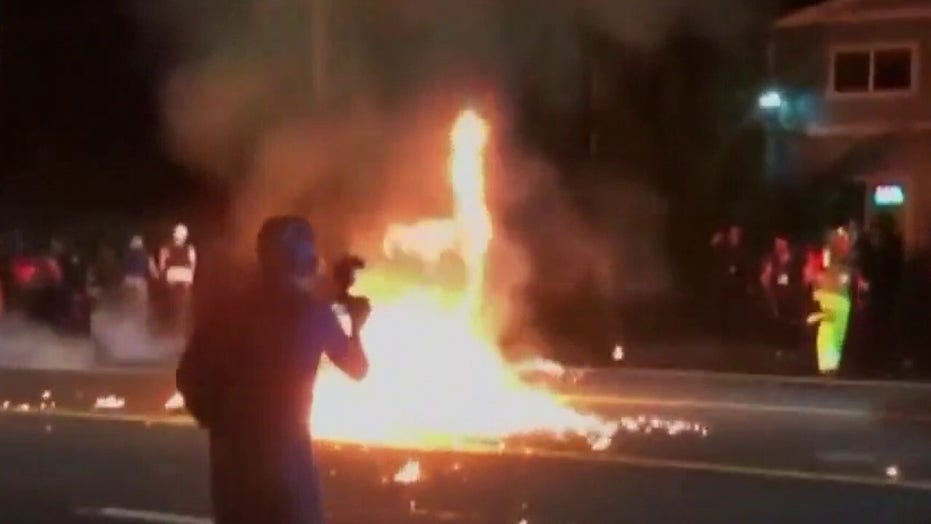 President Trump continues to blame Democrats for unrest and violence

Former NFL football player Herschel Walker is calling on local leaders to put an end to rioting across the United States.

In a video posted to Twitter Monday, Walker argued that rioters should get federal time for destroying cities and citizens' businesses.

"I’ve watched a lot of these beautiful cities being destroyed by people rioting and I saw all these local leaders that won’t step to the plate to protect their citizens or their citizens’ businesses," Walker said in a video posted to Twitter.  "So I’m going to step up to the plate and become a local leader in a sense that I want to put in a mandate that anyone arrested during a riot and they’re not from that city, they don’t have a resident in that city or that town, should be arrested and get federal time."

His comments come less than 24 hours after his longtime friend, President Trump, blamed “Radical Left” Democratic governors and mayors for unrest in cities across the country that occurred over Labor Day weekend.

HERSCHEL WALKER ON PROTESTS BY PRO ATHLETES: 'HOPE' AND 'PRAY' NFL BRINGS BOTH SIDES TOGETHER ON SOCIAL JUSTICE ISSUE

On Friday night, 11 people were arrested and three police officers were injured after protests in Rochester, New York turned violent for the third night in a row after the leader of Rochester’s police union defended the seven officers linked to the death of Daniel Prude, a Black man, who died in March of asphyxiation.

"Sadly for this President, a peaceful protest is a 'bad night' -- he thrives on anarchy and stokes the flames of division," DeRosa tweeted.

"We know you thrive on anarchy and seek to fan the flames of hate, but Sunday night's protest in Rochester was described as peaceful by both demonstrators and RPD," DeRosa added. "Knock it off and get to work, Mr President."

In Portland, protesters entered their 100th day of unrest since demonstrations began following the death of George Floyd, a Black man who died in police custody in May.

Meanwhile, five people were shot in Brooklyn on Sunday evening, including a 6-year-old boy during an outdoor celebration. All of the victims were taken to the hospital with nonlife-threatening injuries, according to police. NYPD Chief of Detectives Rodney Harrison said the little boy and his mother were just getting out of a cab when they were shot. The little boy was in surgery Monday, according to The New York Post.

Walker spoke at the Republican National Convention last month, where he defended the president against accusations of racism.

“Just because someone loves and respects the flag, our National Anthem, and our country doesn’t mean they don’t care about social justice. I care about all of those things, and so does Donald Trump,” Walker said. “He shows how much he cares about social justice and the Black community through his actions. And his actions speak louder than any stickers or slogans on a jersey.”

Walker spent three seasons with the Generals before joining the NFL. He was a two-time Pro Bowl selection while playing for the Dallas Cowboys, Minnesota Vikings, Philadelphia Eagles and New York Giants.