As the investigation into the wreck that killed Kobe Bryant, his daughter and seven others continues, a Google Nest recording has surfaced with audio of the helicopter’s last moments in the air.

Also, the NTSB revealed that the aircraft that crashed Sunday in the Los Angeles suburb of Calabasas lacked a terrain awareness system that would have warned of an approaching hillside.

Ronna Leavitt’s doorbell recording, which was obtained by ABC 7 Los Angeles, has a time stamp of 9:45 a.m. — the same time contact was lost with the doomed aircraft. What is believed to be the NBA legend's helicopter can be heard at varying sound levels and ends with a thump.

The pilot of the helicopter chartered by Bryant had received permission to follow special visual flight rules (VFR) during the flight because of the intense fog, which allows pilots to navigate using landmarks. It also meant he needed to fly lower to be able to see the ground, instead of using the instrument flight rules (IFR) that help pilots navigate through clouds, the Los Angeles Times and NPR reported.

National Transportation Safety Board investigator Jennifer Homendy said the pilot had rapidly ascended to get out of a cloud bank and the helicopter was at 2,300 feet when it lost contact with air traffic control. It then descended at more than 2,000 feet per minute.

“We know that this was a high-energy impact crash, and the helicopter was in a descending left bank,” Homendy said.

The helicopter crashed on the hillside at an elevation of 1,085 feet, the Times reported. The plane was about 30 feet from clearing the land.

His decision to proceed in deteriorating visibility, though, has experts and fellow pilots wondering if he flew beyond the boundaries of good judgment and whether pressure to get his superstar client where he wanted to go played a role in the crash.

"The perceived pressure is, `Man, if I don't go, they're going to find somebody who will fly this thing,'" Jerry Kidrick, a retired Army colonel who flew helicopters in Iraq, said.

The impact spread debris over more than 500 feet. The remains of all the victims were recovered Tuesday and so far the remains of Bryant, pilot Ara Zobayan and two other passengers have been identified using fingerprints. 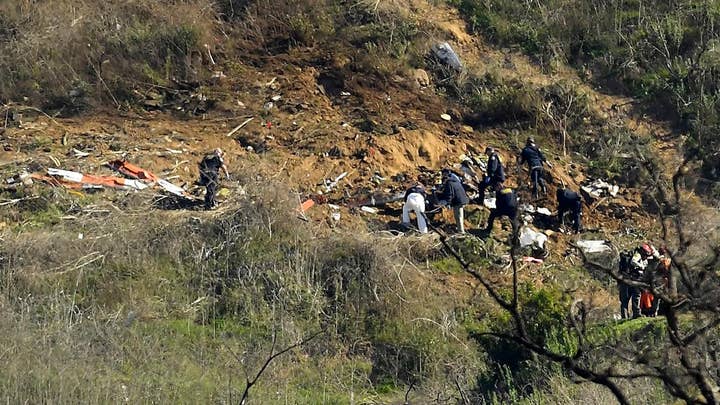 Homendy said it was too soon to say whether the pilot had control of the helicopter during the steep, high-speed descent, although she noted that "it wouldn't be a normal landing speed."
She said the NTSB recommended the Terrain Awareness and Warning System (TAWS) be made standard on all helicopters with six or more passenger seats. The helicopter Bryant had charted, which he used regularly, didn’t legally need to have it, the Times reported.

Bill English, investigator in charge of the NTSB's major investigations division, said it's not clear yet whether "TAWS and this scenario are related to each other."

The system would have sounded an alarm if the helicopter was approaching the ground.

She said the Federal Aviation Administration “failed” to act on the recommendation, an assessment the FAA has disputed, citing the system is required on all helicopter ambulances, the Times reported. It is not required on other helicopters.

After the NTSB’s recommendation following a 2004 crash that killed 10 people in the Gulf of Mexico, the FAA questioned whether the system could cause too many false alarms and distract the pilot since helicopters are allowed to fly close to the ground.

“Certainly, TAWS could have helped to provide information to the pilot on what terrain the pilot was flying in,” Homendy said.

Helicopter pilot and aviation lawyer Brian Alexander said it “wouldn’t necessarily have prevented the crash if this was a combination of a deteriorating weather situation and the pilot experiencing spatial disorientation. Your body is sensing something that isn’t happening. Another warning system screaming at you isn’t going to help.”

Zobayan was an experienced pilot with thousands of flying hours. He had flown Bryant before and flew a similar route from Orange County to Ventura County the day before the crash, but on the ill-fated flight he had to divert because of the thick fog.

While TAWS was not installed on the helicopter flying Bryant, the aircraft did have a warning system using GPS, said pilot Kurt Deetz, who flew Bryant dozens of times in the chopper over a two-year period ending in 2017.

Investigators have not determined the cause of the crash yet, which could take months, and it’s unclear if TAWS would have made a difference.