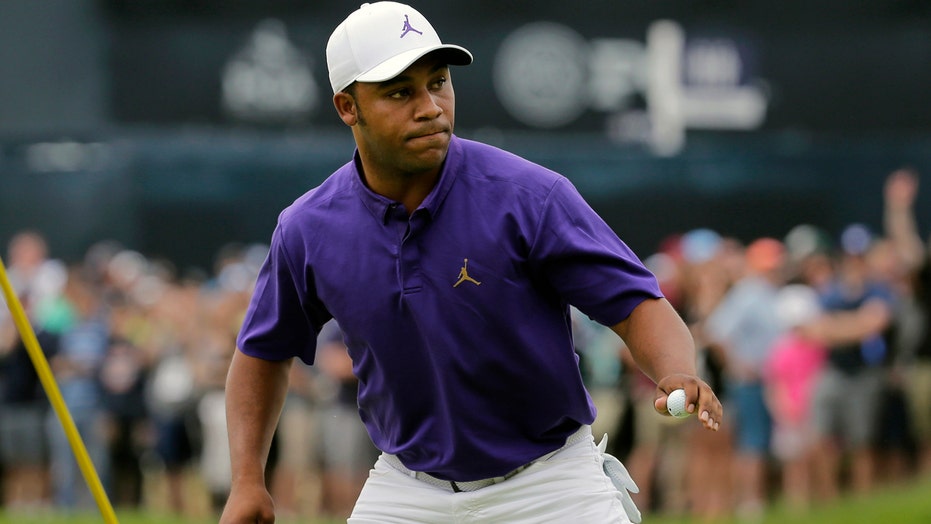 Harold Varner III woke up Sunday morning as one of four golfers in a tie for second place at the PGA Championship at Bethpage Black, seven shots behind 54-hole leader Brooks Koepka. He cut that gap to five strokes on the very first hole, which Varner birdied and Koepka bogeyed.

And then it all fell apart.

Varner, the 174th-ranked player in the world, shot an 11-over 81 that dropped him into a five-way tie for 36th place at 6-over par, 14 shots behind Koepka, who held off Dustin Johnson by two shots to win his fourth major in 23 months.

"Man, it's just rough. It was hard. It was really hard," said Varner, whose only win was in the 2017 Australian PGA championship. "I just didn't play well enough. It was a great experience. I'm going to get a lot better. It's just a hard golf course. I don't know, I don't know. It's good."

Harold Varner III reacts after sinking a putt for birdie on the first green during the final round of the PGA Championship golf tournament, Sunday, May 19, 2019, at Bethpage Black in Farmingdale, N.Y. (AP Photo/Seth Wenig)

Varner's score was the worst by a player in the final pairing on the final day of a major since Rory McIlroy shot 80 on Sunday at the 2011 Masters. McIlroy, who entered that final round with a four-shot lead, finished 10 shots behind champion Charl Schwartzel and is still looking for a green jacket to complete the career grand slam.

The 28-year-old Varner's afternoon began to go sideways at the par-3 third, where he missed the green, chipped to 11 feet and three-putted for double bogey.

The worst hole was the par-5, 524-yard No. 4. His 324-yard tee shot landed in stalk-like grass. His second went sideways into the woods, and the ball was lost. Even Koepka came to help, but to no avail.

"I had about 30 seconds left," Varner said of the search. "I didn't think we were going to find it anyways. I didn't really look for my golf ball. I thought I was screwed."

Varner had to return to the native area and eventually took a 7. He proceeded to bogey holes No. 5, No. 7 and No. 9, no. 12 and No. 13 before a double-bogey on the par-3 14th and another bogey on No. 16 brought an end to his ignominious afternoon.

For those of you scoring at home, that's one birdie, three double bogeys, six bogeys and eight pars.

Varner could take consolation that he was not the only player to struggle on a windy, difficult day on Long Island. Just six of the 82 golfers who made the 36-hole cut finished the tournament under par and even Koepka -- who had seemed to be in total command all week -- struggled to the finish with a 4-over par 74 that saw Johnson briefly come within one shot of the lead.

"That was crazy," Varner said. "But it happens. I just — mine happened on the last day. I'm going to get a lot better. It was just really hard. I don't know what else to say."

Varner, who is African-American, received good luck messages from Masters champion Tiger Woods and basketball great Michael Jordan. Varner didn't disclose exactly what Woods, who didn't make the cut, said to him, other than to keep it simple.

What really bothered Varner and was completely out of his — and Koepka's control — were some fans yelling for Koepka to choke after Dustin Johnson drew close.

"I have a few choice words for that," said Varner, whose week began with plans to play a practice round with Woods on the eve of the tournament until Woods called in sick. "I thought it was pretty weird how they were telling Brooks to choke. That's not my cup of tea. I was pulling for him after that."