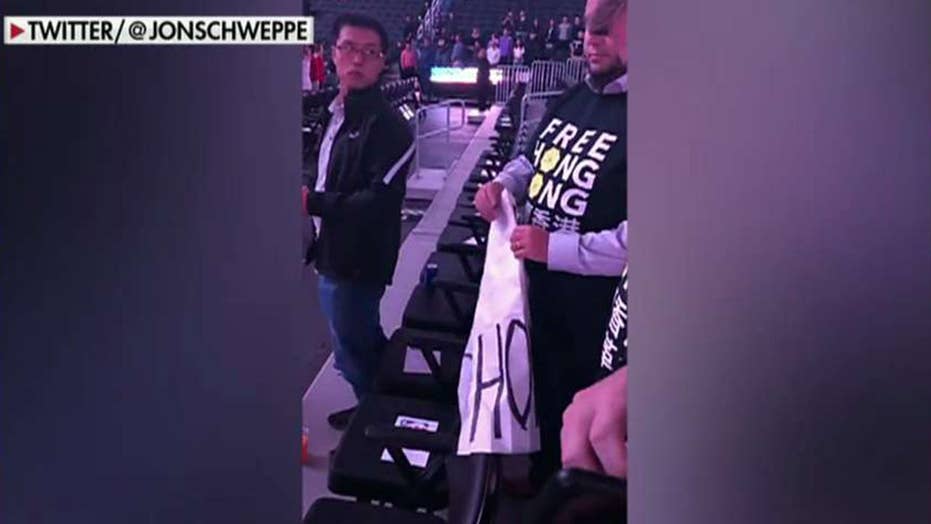 Protester Jon Schweppe weighs in on having his pro-Hong Kong signs confiscated at an NBA game in Washington, D.C.

Steve Kerr, head coach of the Golden State Warriors, told reporters Thursday he has never been asked about “human rights abuses” that take place in the U.S. when he visits China.

"No. Nor has our record of human rights abuses come up either,” he said after a reporter asked if he had been questioned about Chinese human rights while in China. “People in China didn't ask me about, you know, people owning AR-15s and mowing each other down in a mall.”

"The world is a complex place and there's more gray than black and white," he added.

Kerr, a frequent Trump critic, was called out by the president earlier this week when he said he didn’t have any thoughts on whether the Chinese were wrong to pressure the NBA to not voice support for pro-democracy protests in Hong Kong.

“He was like a little boy, he was so scared.... He was shaking,” Trump said. “He didn’t know how to answer the question.”

The NBA has had a growing relationship with China, but voicing support for anti-Communist protesters in Hong Kong threatens to damage that relationship.

“It’s a really bizarre international story,” Kerr said about the controversy. “A lot of us don’t know what to make of it. It’s something I’m reading about like everybody is, but I’m not gonna comment further.”