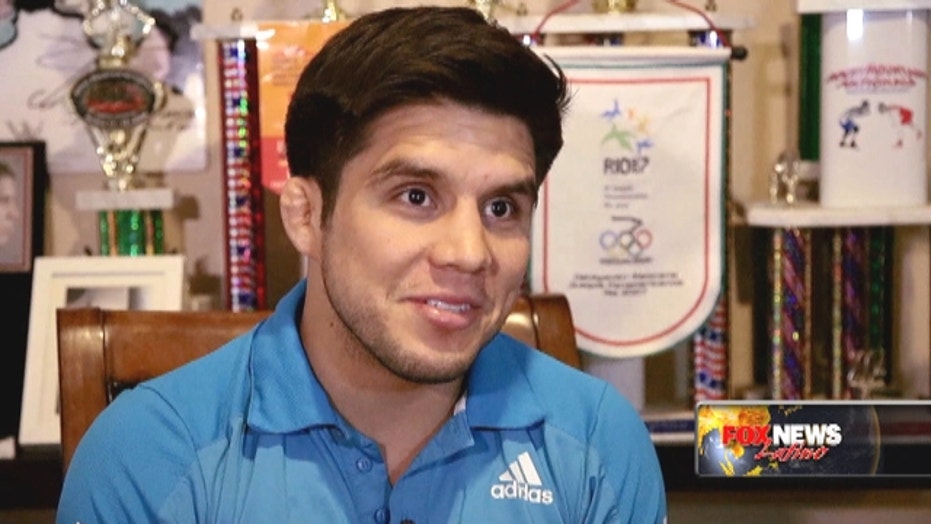 Olympic champion Henry Cejudo to debut in the UFC

Six years after winning the Gold at the 2008 Olympics, champion wrestler Henry Cejudo is taking on Ultimate Fighting. His debut is Dec. 13.

Six years after winning the Gold at the 2008 Olympics, champion wrestler Henry Cejudo is climbing into the octagon. His debut UFC fight is Dec. 13.

The UFC is excited about Cejudo's arrival. Officials hope he will bring his wrestling fan base to the sport and that his story will inspire others to follow in his footsteps.

Cejudo's parents came to the U.S. illegally before he was born. He was raised by a single mother who worked odd jobs, and Cejudo took up wrestling to escape the poverty and crime all around him. His coaches spotted a rare talent, and they encouraged him to begin training in Colorado for the Olympics. His Gold medal at the 2008 Beijing  games made him the only Latino and the youngest wrestling champion in history.

Since then, he has been studying business and religion at a university in Phoenix – and working on his boxing skills. His coach, Tom Ortiz, says Cejudo has been learning new fighting techniques. "There is a lot of wrestling in mixed martial arts, however, there is also a lot of other stuff, too, that we have to deal with."

Cejudo says he never considered going back to wrestling. "Right now, my heart is in mixed martial arts," he said, adding that he was done with wrestling. "I had sacrificed so much of my life, moving to the Olympic training center at the age of 16, sacrificing my life day in, day out. I couldn't tell the difference between training and prison because I just couldn't tell a difference. To me, it was like an everyday grind. I was a slave to my sport. I was a slave to my dream."

He likes the fact that UFC has no rules. "I get a chance to put more pain in my opponent. Rather than just pinning them and beating them by points, you can literally knock somebody's lights out, and I think that's the difference. It sounds pretty vicious for me to say, but I like it."

Cejudo starts his MMA career with the goal of not just winning but inspiring others to achieve their goals.

"I understand that I'm in this world for a purpose, and there's a bigger purpose in life than success," he said. "It's 'How can I become the best in the world?' and 'How can I inspire the world to be a better place?'"