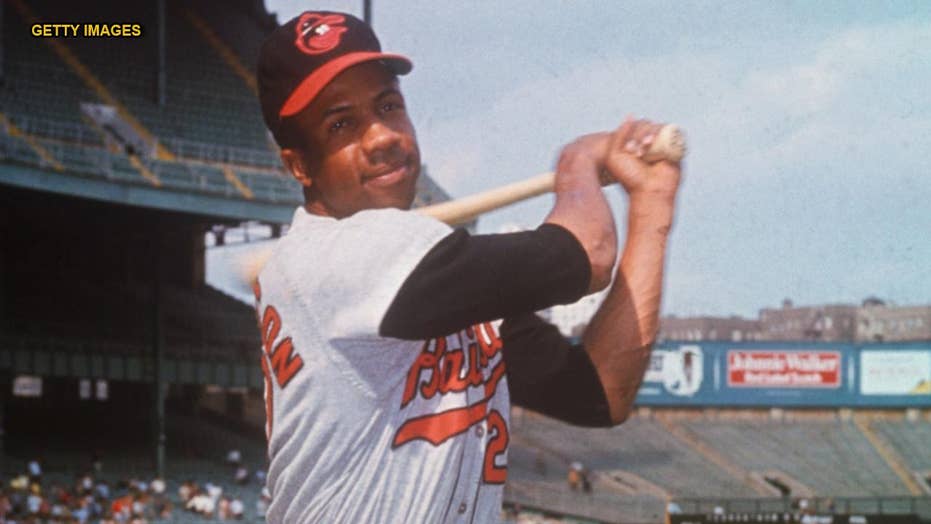 Frank Robinson, a Hall of Fame outfielder who was the first player to win an MVP award in both the American League and National League and later became the first African American manager in Major League Baseball, died Thursday. He was 83.

Robinson passed away at his home in Southern California, MLB said. He had recently been in hospice care.

"Frank Robinson's resume in our game is without parallel, a trailblazer in every sense, whose impact spanned generations," Major League Baseball Commissioner Rob Manfred said in a statement. "He was one of the greatest players in the history of our game, but that was just the beginning of a multifaceted baseball career."

Robinson batted .294 with 586 home runs in 21 seasons with the Cincinnati Reds, Baltimore Orioles, Los Angeles Dodgers, California Angels and Cleveland Indians. He won the World Series with the Orioles in 1966 — earning series MVP honors after batting .286 with two home runs – and 1970. The Reds, Orioles and Indians retired his No. 20 and honored him with statues at their stadiums.

Robinson won his first league MVP with the Reds in 1961, when he led the National League with a .611 slugging percentage, blasting 37 home runs and driving in 124 runs as Cincinnati won the National League pennant. With Baltimore in 1966, he won the Triple Crown — leading the American League with a .316 batting average, 49 home runs and 122 RBIs – en route to the AL MVP award.

Robinson later managed the Indians, Orioles, San Francisco Giants, Montreal Expos and, most recently, the Washington Nationals. Though his clubs never finished first and posted a combined 1,065-1,176 record, Robinson was a trailblazer, opening the door for African American and other minority managers in the years since. More than half the major league teams have had black managers since Robinson's 1975 debut in the Cleveland dugout.

Robinson worked as an executive with MLB after he finished managing and for a time oversaw the annual Civil Rights Game. He advocated for more minorities throughout baseball and worked with former Commissioner Bud Selig to develop the Selig Rule, directing teams to interview at least one minority candidate before hiring a new manager.

Inducted into the Baseball Hall of Fame as a player in 1982, Robinson sports an Orioles cap on his plaque. He was elected to the All-Star Game 12 times and was the unanimous choice for National League Rookie of the Year in 1956 while with the Reds.

Robinson was awarded the Presidential Medal of Freedom in 2005 by President George W. Bush. The award honors "individuals for an especially meritorious contribution to the security or national interests of the United States, to world peace, or to cultural or other significant public or private endeavors."

"Frank Robinson played the game of baseball with total integrity and steadfast determination," an announcer said during the award ceremony. Robinson was awarded "for his extraordinary achievements as a baseball player and manager for setting a lasting example of character and athletics."

Born Aug. 21, 1935, in Beaumont, Texas, Robinson attended McClymonds High School in Oakland, California, and was a basketball teammate of future NBA great Bill Russell. But it was on the diamond, rather than court, where fame awaited Robinson.

"Heartbreaking news in the passing of my Dear Friend & @McClymondsHS classmate Frank Robinson," Russell wrote on Twitter alongside a picture of him and Robinson. "It was my pleasure & great honor to have known him. We all know we lost one of the Greats, what we really lost was a Friend."