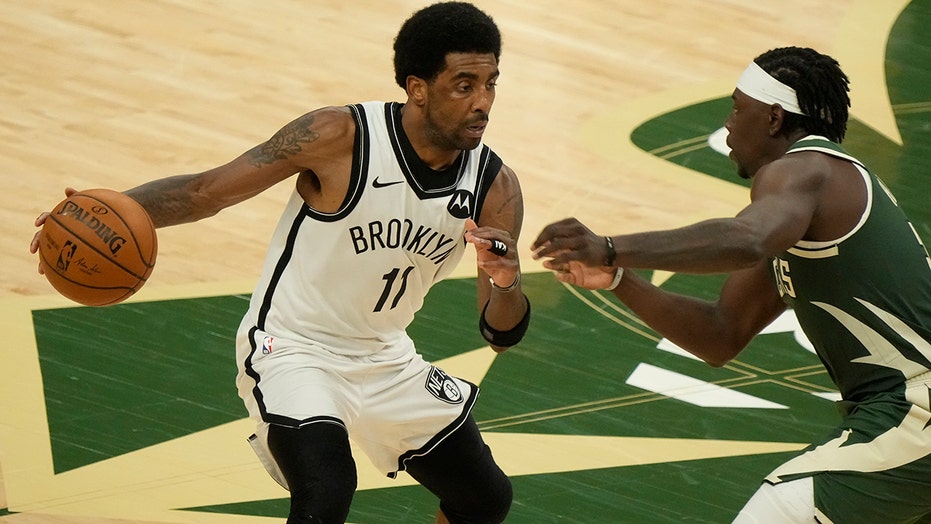 Irving suffered a sprained ankle when he accidentally stepped on Milwaukee Bucks star Giannis Antetokounmpo’s foot in the second quarter of their Game 4 Eastern Conference Semifinals game. Irving went down in pain and was unable to return to the game.

Davis made known there was no love lost for Irving, especially after the controversy when Irving stepped on the Celtics’ logo after a Nets win over Boston during their playoff series.

"That’s the same ankle stomp on lucky with," Davis wrote on Instagram.

Irving’s logo stomp happened after the Nets’ victory over the Celtics in Game 4 of the first round of the Eastern Conference championship. He appeared to stomp and scrape his foot on the face of the Celtics logo while greeting his teammates as the clock hit triple zeroes.

Brooklyn Nets guard Kyrie Irving scrapes his foot on the Boston Celtics logo at mid-court after they defeated the Celtics  in Game 4 during an NBA basketball first-round playoff series, Sunday, May 30, 2021, in Boston. (AP Photo/Elise Amendola)

Irving, who’s had a rocky relationship with the Celtics organization after he left the team for the Nets before the start of the 2019-20 season, was booed every time he touched the basketball at TD Garden.

As he walked back to the locker room at that time, he had a water bottle thrown at him. It was just one of a slew of fan incidents that have occurred during the NBA playoffs.