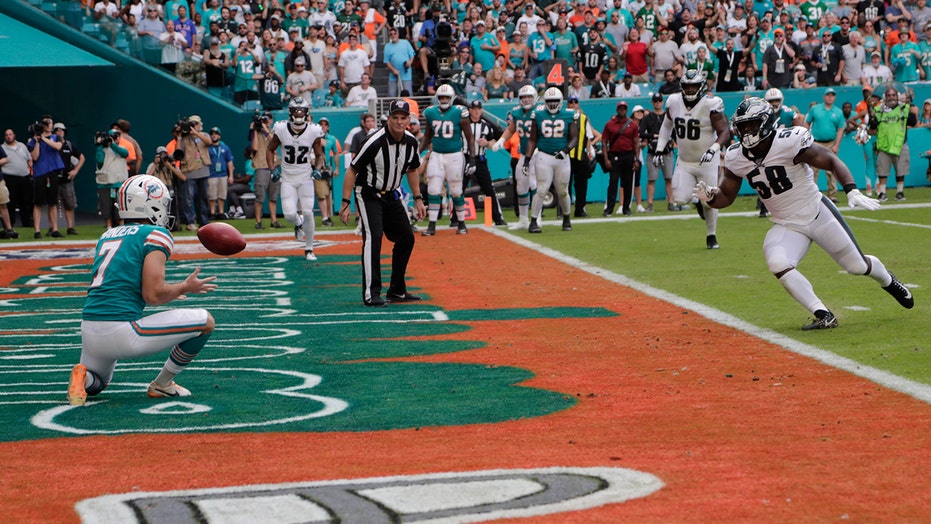 With nothing left to lose amid a lost season, the Miami Dolphins showed some moxie Sunday by breaking out a trick play in their surprising win over the Philadelphia Eagles.

Down six points in the second quarter, the Dolphins pulled a highlight-reel stunt on 4th-and-goal near the Eagles’ end zone.

The Dolphins initially lined up for a field goal but moved into a different formation with punter Matt Haack lining up under center Daniel Kilgore while the rest of the team was spread out on both sidelines.

Haack received the snap and ran to his left and as the Eagles defense was rushing him he flipped the ball to kicker Jason Sanders who was wide open in the end zone for the score. The Dolphins took a 14-13 lead into halftime.

J.J. WATT MIGHT RETURN TO TEXANS FOR PLAYOFFS: REPORTS

It was the play that ignited Miami’s 37-31 victory.

According to the Sun-Sentinel, the play was called “Mountaineer Shot.” It was named after Kilgore who was a center for the Appalachian State Mountaineers in college. Sanders was the first kicker to catch a passing touchdown since Jim Turner did it in October 1977.

“It's exactly what we planned for,” Haack said. “That was pretty cool.”

Miami moved to 3-9 on the season, while Philadelphia dropped to 5-7.

The loss further hinders Philadelphia’s playoff chances. The team had a chance to get into a tie for first place with the Dallas Cowboys in the NFC East, but now have lost three straight and still sit one game behind Dallas in the division.