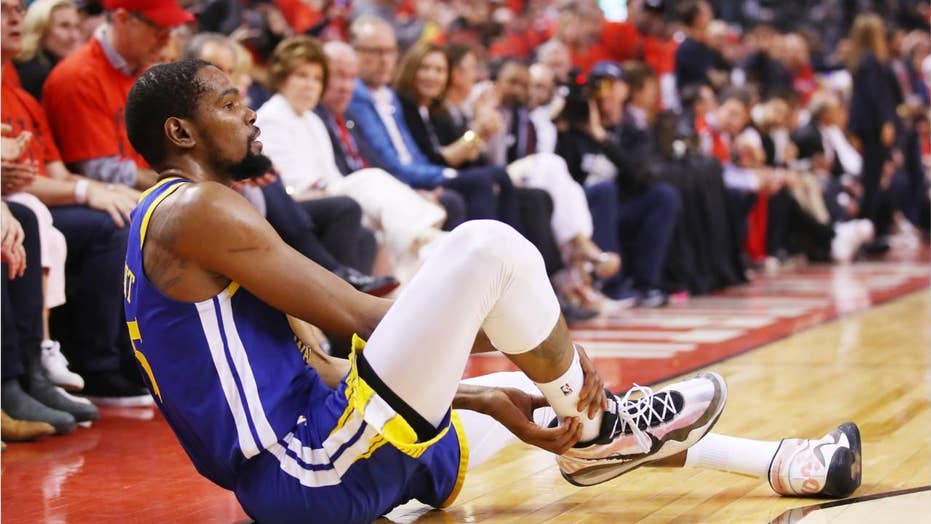 The emerging narrative that Kevin Durant had his ruptured right Achilles tendon repaired by a New York surgeon continues to spark speculation of team tension with its superstar.

The emerging narrative Kevin Durant had his ruptured right Achilles tendon repaired by a New York surgeon in spite of the Warriors’ medical staff is bogus, according to one local doctor who watched the tragic injury unfold from afar.

“I knew he was coming [to New York],” said New Jersey foot and ankle orthopedic surgeon Andrew Brief, who has known Dr. Martin O’Malley for over a decade. O’Malley performed what Durant called on Instagram a “successful” surgery to repair the tear Wednesday.

“I mean, O’Malley operated on him before [2015 foot surgery],” Brief said. “He’s a repeat customer. That was the way it was going to go the moment it happened.”

While it’s projected Durant could miss a year, Brief said several athletes average seven-to-nine months before returning to action. Wesley Matthews, an outlier, suffered the same injury in March 2015 and was back just under seven months, in time for the beginning of next season. Kobe Bryant needed eight months to recover in 2013. Others need a year, while some never return.

Brief said surgery “techniques have improved” and smaller incisions as a result “suggest” a quicker recovery time. He added that age shouldn’t factor that much into the timeline for Durant, who will turn 31 in September.

There had been scuttlebutt Durant’s decision to go with O’Malley reflected poorly on Golden State’s medical staff, which oversaw his rehabilitation from a right calf strain suffered in early May and his return to Game 5 of the NBA Finals on Monday night, which was cut short by the Achilles injury.

That O’Malley also doubles as the Nets’ team physician and had previously worked with the Knicks — both teams are expected to be among the front-runners to land Durant as a free agent this summer — only fanned the flames. Brief, in a telephone interview with The Post hours after Durant revealed his surgery Wednesday, said the choice of surgeon had more to do with O’Malley’s prominent status in the industry.

The looming question is whether Durant should have returned a month after suffering a calf strain, the severity of which was kept a mystery. GM Bob Myers said after Game 5 that it was a “collaborative decision” for Durant to play, and Brief said the calf strain, given its location, made the Achilles more “vulnerable” to injury. The Mets’ Jed Lowrie (hamstring) and Yankees’ Dellin Betances (lat strain) recently suffered injury setbacks different than their original diagnosis, which Brief likened to Durant’s scenario.

Brief absolved the Warriors’ medical staff of blame, and pointed to Durant’s flying around in warmups without issue, adding he likely would have made the same call. Durant had 11 points in 12 minutes before being knocked out of the game.

“This was a matter of bad luck more than bad judgment,” Brief said.