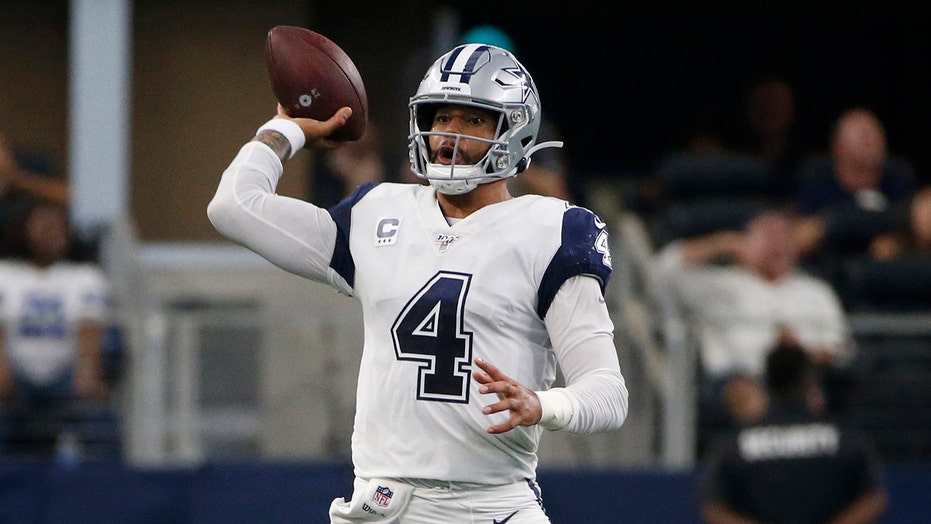 Dallas Cowboys quarterback Dak Prescott is expected to sign his franchise tag tender by Monday, according to an ESPN report, locking him in for a $31.4 million salary for the 2020 NFL season unless the two sides agree to a new long-term deal by the July 15 deadline.

When the Cowboys tagged Prescott back in March, they placed the exclusive franchise tender on him, which meant Prescott’s expected salary in 2020 would be the average of the top-five highest-paid quarterbacks in the NFL.

This also meant Prescott was obligated to report to training camp, assuming it goes on as scheduled amid the coronavirus pandemic.

According to an initial report, Prescott was offered a five-year, $175 million contract from the Cowboys, which would make him the highest-paid quarterback in NFL history -- but the two-time Pro Bowler reportedly was seeking over $45 million per year to play for the Cowboys.

NBC Sports’ Chris Simms told KRLD radio in Dallas that Prescott wanted a four-year deal, and if they ended up agreeing on a five-year contract, “they would like a really big number at the end of that fifth year to cover their butts for what the market might be at the position five years from now.” ESPN followed by reporting that “there have been no discussions on other scenarios other than the Cowboys wanting a longer deal and Prescott wanting a shorter deal.” And finally, NFL Network followed that up by saying the Cowboys and Prescott’s agent said the initial report by Simms was “definitely not true.” Per NFL Network, “the two sides have never discussed such scenarios or anything like it.”

Prescott wanted a shorter deal and the Cowboys wanted a longer one, NFL Network reported.

In April, sources told ESPN that Prescott didn’t plan on participating in the Cowboys’ offseason program until both sides agreed to a long-term contract. Cowboys owner Jerry Jones didn’t seem too concerned about reaching a deal at the time, and he was unsure whether Prescott was going to sign his franchise tender.

"It's not in a list of priorities, as you could imagine, with everything that we all are dealing with, as well as what we're doing with the draft," Jones said at the time, as ESPN noted. “So I don't have a time frame, but I'm not concerned about that at all as to any of those issues. And again, no surprises here; no surprises on the amount that the franchise counts against the [cap]; no surprise that we're sitting here, relative to where we are, without a long-term agreement.”

It’s still unclear whether the Cowboys and Prescott will get a deal hammered out. Dallas already has given contract extensions to Ezekiel Elliott, Jaylon Smith, La’el Collins, DeMarcus Lawrence and Amari Cooper since April 2019.

The team also recently signed defensive end Aldon Smith to a one-year contract, and they brought in quarterback Andy Dalton as Prescott’s backup -- or in case Prescott sat out or got injured.