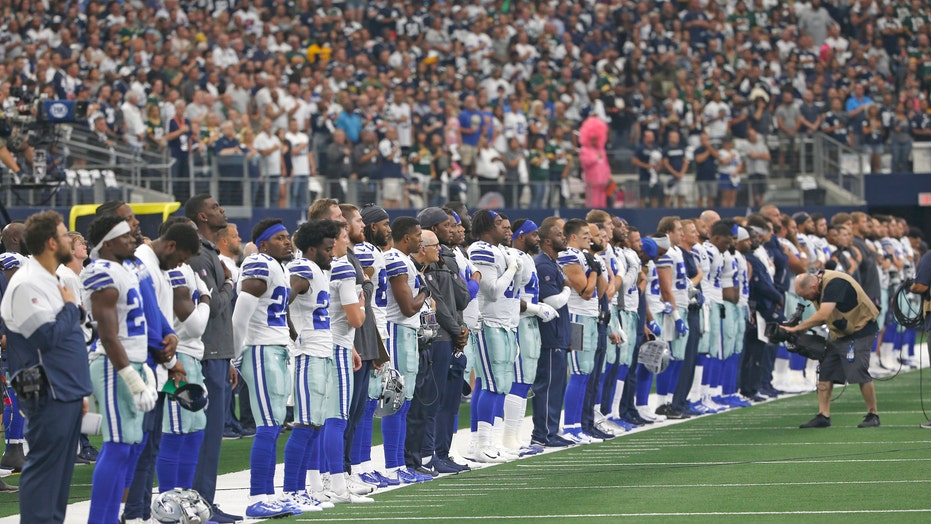 Dak Prescott wants his teammates on the Dallas Cowboys to decide for themselves whether to protest during the national anthem.

Defensive lineman Tyrone Crawford says they have the “green light” to do so.

Owner Jerry Jones hasn't said in so many words, but it appears his hard-line stance requiring players to stand during the anthem has eased amid a national reckoning over racial justice.

When the Cowboys open the season next Sunday night at the new home of the Los Angeles Rams, it seems clear several players are likely to kneel during “The Star-Spangled Banner” for the first time — four years after Colin Kaepernick started the gesture to protest racial inequality and police brutality.

“We all do understand where I stand relative to the national anthem and the flag. On the other hand, I really do recognize the time we’re in,” Jones said during his radio show last week, after Prescott and Crawford offered their hints of what was coming.

“I will assure you, our players, they are sensitive to and can respect what America is as it relates to the flag. And I would hope that our fans, which I think that they will, will understand that our players have issues that they need help on. And they need help along with the majority of America. They need help.”

Jones' tone was quite different two years earlier at training camp, when he said he wouldn't even allow players to stay in the locker room during the anthem, issuing his memorable “toe on the line” declaration.

Not long after, Prescott said he didn't think kneeling during the anthem was the right time or place for such a protest, although the star quarterback said he respected each player's right to decide. He's keeping the last part, and not mentioning the first anymore.

“That’s what this country is about, the freedom to do that, the freedom to express yourself,” Prescott said. “As we heard Mr. Jones talk about grace and sharing grace and having grace with players in what they want to do. If I had it my way, that’s exactly what we’d do is express ourselves individually but love and support one another collectively.”

Dallas wasn't among the NFL teams that chose not to practice after the police shooting of Jacob Blake in Wisconsin led to brief shutdowns of the NBA and NHL playoffs. But it sparked another round of conversations that had been going on since the start of training camp, in the wake of George Floyd's death while in custody of Minneapolis police.

Defensive tackle Dontari Poe, a free-agent addition in the offseason, reiterated that he intended to kneel. While no other Cowboys have said they will join Poe, there's been plenty of talk about team unity with whatever they do.

Three years ago, Jones convinced the team to kneel together before the anthem but stand during it on a Monday night in Arizona. He joined them on the field. Jones seems to understand that kneeling before the anthem might not be enough this time.

“I was just pretty much-saying something, saying I was going to do something that I felt was right for me and for others,” Poe said. “Not saying that anybody else is wrong for not doing it or whatever their cause is, but I just felt like I just wanted to do it for me and the statement I wanted to make.”

Offensive lineman Cameron Erving shared stories with reporters of being the target of racial slurs as recently as 2018, and of realizing years later the racist nature of things that happened to him growing up in rural south Georgia.

First-year coach Mike McCarthy's father worked 38 years as a police officer and firefighter in Pittsburgh. McCarthy spent 12-plus seasons as the coach in Green Bay, winning a Super Bowl, so the Blake shooting hit home for him.

McCarthy said the conversations between players and Jones were “ongoing.” It hasn't been clear how much Jones has been involved in those meetings.

“Frankly what comes out of those conversations is probably to point more to the people that are in them,” McCarthy said. “It’s not frankly something I’m specifically going to talk on. This has been an ongoing conversation since we got together there back in April and May.”

Crawford said he agreed with Prescott's belief that individual expression was the way to go.

“We definitely have the green light on all that,” Crawford said. “But also just try to find something that is going to make a boom and not just something people look at one time and kinda just swipe by. We want to do something that makes a boom and people remember and actually create some change.”

Any Dallas player kneeling will be a “boom” because it hasn't happened yet.