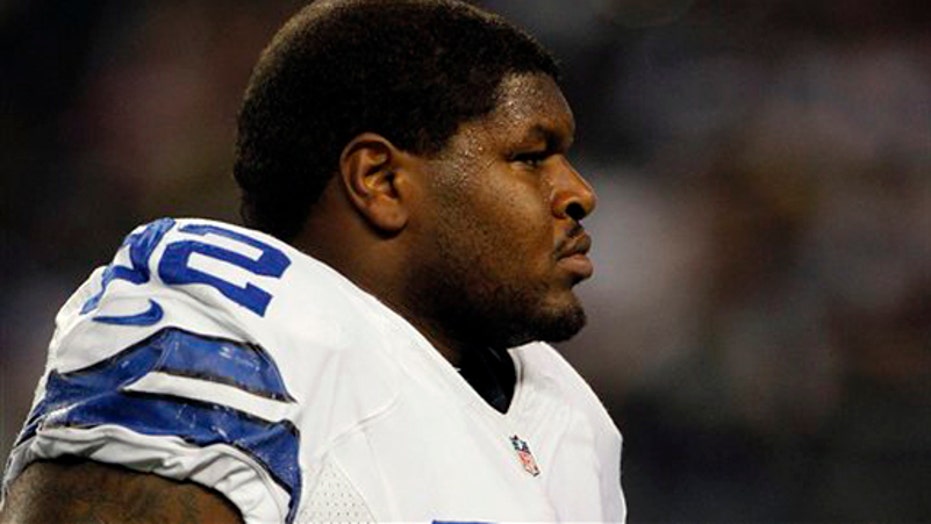 Irving police spokesman John Argumaniz said the accident happened about 2:20 a.m. Saturday in the Dallas suburb, hours before Brent was to be on a team flight to Cincinnati for the Cowboys' game Sunday against the Bengals.

Argumaniz said the 25-year-old Brown -- a practice-squad linebacker who also was Brent's teammate for three seasons at the University of Illinois -- was found unresponsive at the scene and pronounced dead at a hospital.

Brown died a week after Kansas City Chiefs linebacker Jovan Belcher fatally shot his girlfriend before killing himself in front of his coach and general manager.

"We are deeply saddened by the news of this accident and the passing of Jerry Brown," Cowboys owner Jerry Jones said in a statement. "At this time, our hearts and prayers and deepest sympathies are with the members of Jerry's family and all of those who knew him and loved him."

Officers conducted a field sobriety test on Brent and arrested him on suspicion of driving while intoxicated, Argumaniz said. The charge, a second-degree felony punishable by two to 20 years in prison, was upgraded after Brown was pronounced dead.

Argumaniz said Brent, who pleaded guilty to a drunken driving charge three years ago at Illinois, was being held without bond. Brent is named as Joshua Price-Brent in the police news release. Argumaniz said Brent missed a 10 a.m. Saturday booking session with a judge because he was intoxicated. He did not know if Brent had an attorney.

Brent was speeding when the vehicle hit a curb and flipped at least once, Argumaniz said. Police received 911 calls from motorists who saw the upside-down vehicle but they did not immediately have any eyewitnesses to the wreck, the police spokesman said.

Argumaniz said when officers arrived at the scene on a state highway service road, Brent was dragging Brown from the vehicle, a Mercedes, which was on fire. Officers quickly put out the small blaze, he said.

Argumaniz said it wasn't known how fast the vehicle was traveling. The road has a 45 mph limit.

"I can say investigators are certain they were traveling well above the posted speed limit," Argumaniz said.

Before he was taken to the jail, Brent went to a hospital for a blood draw for alcohol testing and also received treatment for some minor scrapes.

Argumaniz said Brent identified himself to officers as a Cowboys player.

Former Illinois coach Ron Zook said Brent, a third-year player who made the first start of his career in the opener against the New York Giants, was trying to help Brown make it in the NFL. Brown joined the Cowboys in October after he was released by the Indianapolis Colts.

"It was Jerry's dream, and Josh was trying to help him any way he could," Zook said.

Zook said he spoke with Brent's agent, Peter Schaffer, who said he had made contact with Brent.

"He said Josh was distraught, and he didn't care about himself or what was happening to him," Zook said. "All he cared about was Jerry's family."

Brent was arrested in February 2009 near the Illinois campus for driving under the influence, driving on a suspended license and speeding, according to Champaign County, Ill., court records.

In June 2009, Brent pleaded guilty to DUI and was sentenced to 60 days in jail, two years of probation, 200 hours of community service and a fine of about $2,000. As part of his plea deal, prosecutors dropped one count of aggravated DUI/no valid driver's license. Brent successfully completed his probation in July 2011, court records show.

Brent, a nose guard, has played in all 12 games this season and played a bigger role than expected with starter Jay Ratliff battling injuries. He has 35 tackles and 1 1/2 sacks and might have started Sunday against the Bengals because Ratliff is out with a groin injury.

"On behalf of the entire Colts family, our sincerest condolences go out to Jerry's family and friends," Colts general manager Ryan Grigson said in a statement. "He was a good teammate that was well liked by all. Today's tragic news is just another reminder of how fragile life is and how everyday given is a gift."

Brent and Brown played at Illinois from 2007 to 2009. Brent played as a freshman and finished his career with 71 tackles and five sacks. Shortly after his guilty plea on the DUI charge, Brent entered the supplemental draft with a year of eligibility remaining, and the Cowboys took him in the seventh round.

"I can't believe it," Travon Bellamy, a former Illinois teammate, wrote on Twitter. "Before people pass judgment on Josh, they need to know that he is a good person that made a bad mistake."

He was born and grew up in St. Louis, attending Vashon High School.