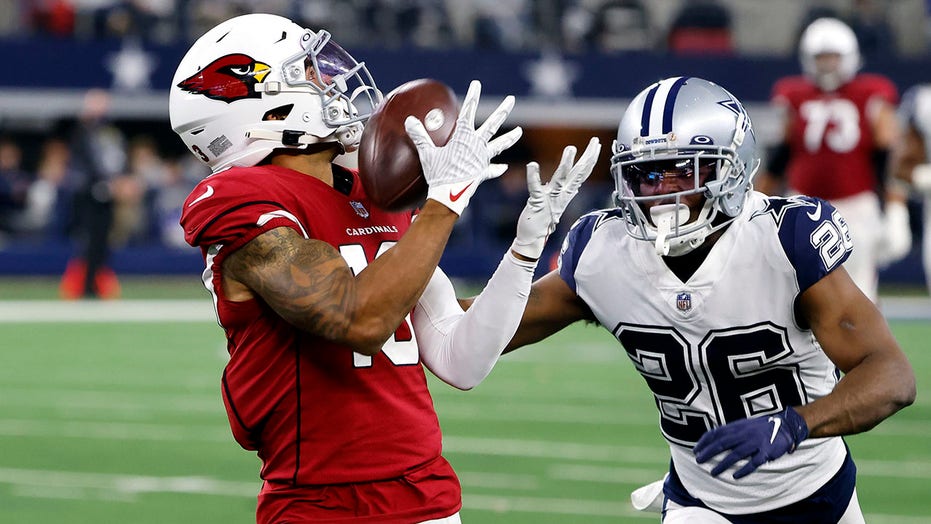 The Dallas Cowboys surely have themselves to blame for their 25-22 loss against the Arizona Cardinals on Sunday but the team lamented over the game’s officiating, with one player saying: "The refs wouldn't let us get a rhythm."

The Cowboys helped to end the Cardinals' three-game skid but several players seemed to suggest that Scott Novak's officiating crew, which called 10 penalties for 88 yards against Dallas, was also a factor in Arizona’s victory.

"It's just we couldn't get a rhythm," wide receiver CeeDee Lamb said, via ESPN. "The refs wouldn't let us get a rhythm."

Chase Edmonds of the Arizona Cardinals runs the ball and looks to break a tackle by Jourdan Lewis of the Dallas Cowboys on Jan. 2, 2022 in Arlington, Texas.  (Tom Pennington/Getty Images)

"I know it's a possibility we see both of these teams in the playoffs. You know hopefully the NFL can sit down with their team, review the film, learn from their mistakes and get better from it."

Owner Jerry Jones said after the game that the Cowboys anticipated the penalties when learning which crew would be reffing the game.

"Expected those penalties. Just to show you what I read right before we kick off, what I read was ‘major concern: this group calls a lot of ticky-tack, they call a lot of penalties, and that's gonna be a concern for us today,’" he said, via KRLD.

"Of course some of those plays it would've made us not look like, physically, we were struggling. Some of those would've looked a lot better if we could have kept some of those we got called back. That probably has a big impact on how this thing looked, but it was a tough physical game," he continued.

The teams go into the final weekend of the regular season as the fourth and fifth seeds in the playoffs, which would mean a first-round meeting — once again at AT&T Stadium since Dallas won its division. The wild-card round is guaranteed for both teams since Green Bay's 37-10 win over Minnesota on Sunday night left them with no chance to get the NFC's first-round bye.