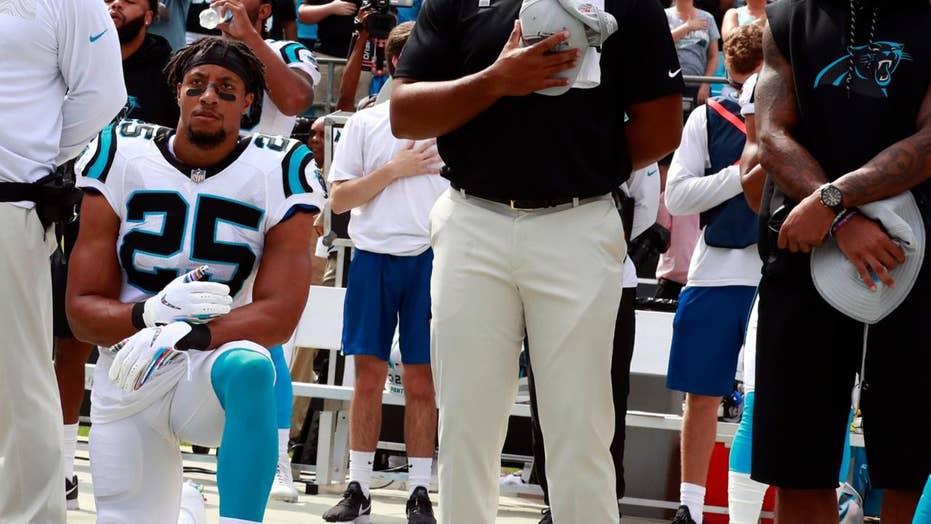 Former San Francisco 49ers quarterback Colin Kaepernick showed support for his former teammate Eric Reid on Tuesday for vowing to continue to kneel during the national anthem this season.

Kaepernick screenshotted a photo of a Washington Post headline that said Reid was going to kneel until he sees changes in the world he views as necessary and posted the picture on social media.

“Unwavering. Unrelenting. Unflinching. Unapologetic. Love you Brother!” Kaepernick wrote in the caption of a tweet and on Instagram.

Kaepernick created a firestorm during the 2016 season when he decided to kneel during the national anthem to protest perceived social injustices in the U.S. Reid was among the first of his teammates to support him in kneeling, which ended up sparking a movement thoughout the NFL and other sports.

Kaepernick opted out of his contract after the 2016 season and has yet to be signed. He and Reid filed a grievance against the NFL, accusing owners of blackballing them because of the national anthem protests. The matter was settled in February.

Reid signed with the Carolina Panthers in the middle of last season as litigation regarding the grievance was ongoing. He continued to kneel during the national anthem throughout the season.

He told the Charlotte Observer in a story published Sunday that certain changes have to happen for him to stand again.

“If a day comes that I feel like we’ve addressed those issues, and our people aren’t being discriminated against or being killed over traffic violations, then I’ll decide it’s time to stop protesting,” he told the newspaper. “I haven’t seen that happen.”

Reid also said he believes the U.S. is getting worse for African Americans.

“It feels like we’re going backwards,” he told the Charlotte Observer. “You’d like to think we’re past certain things, the way we treat people. I thought we were at a time where you love your neighbor as yourself. But as I’ve studied history -- it hasn’t repeated itself necessarily, but it’s dressed a little different and is acting the same.”

Reid played in 13 games for the Panthers last season. He recorded 71 total tackles and one interception.