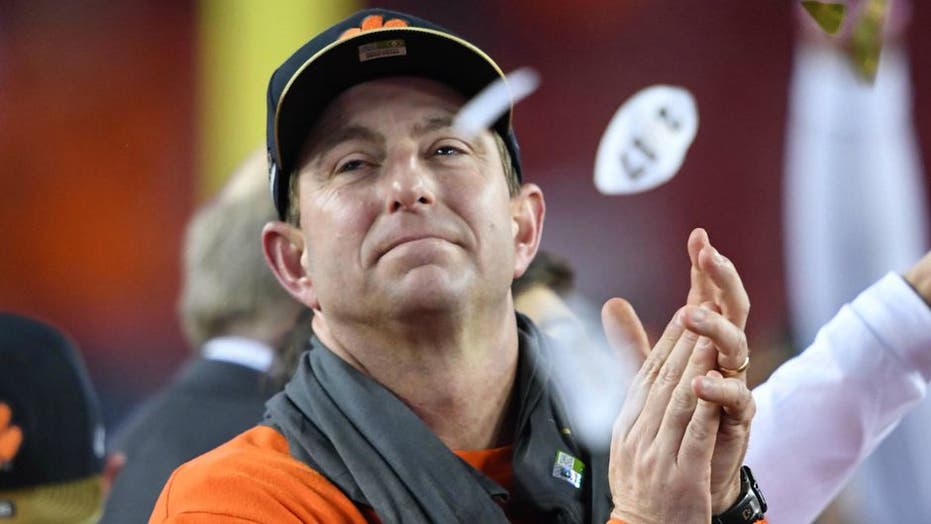 Clemson football coach Dabo Swinney was taking some heat after a picture surfaced on social media that appears to show him wearing a “Football Matters” T-shirt amid protests across the U.S. against racial injustice and police brutality.

The tweet in question read: “Met Dabo today for the first time ever at the Reserve today and even though I went to Oklahoma for undergrad, he really is a great dude and nice as can be. Thanks for the pic Coach!!!”

It’s unclear when the photo was taken and the Twitter account linked to the picture was deleted. However, other users took a screenshot of the tweet and saved the picture.

Swinney was accused of mocking the Black Lives Matter movement. But the New York Post pointed out that the phrase “Football Matters” is a slogan used by the National Football Foundation – a non-profit group that aims to use football in “developing scholarship, citizenship and athletic achievement in young people.”

OKLAHOMA'S LINCOLN RILEY EXPLAINS WHY HE PARTICIPATED IN #BLACKOUTTUESDAY TREND

The Spun also noted that Swinney had used the phrase before.

“Football matters,” he said during a 2017 speech at the South Carolina State House. “It matters. I tell people all the time when I go speak. Football matters. It’s one of the last great positive influences in young people’s lives. They don’t get it in their music, their social media. They don’t get it in a lot of other areas, but in the game of football, it’s still hard work.”

Tigers quarterback Trevor Lawrence was among those defending Swinney.

“Coach Swinney’s shirt, in any way, is not mocking the Black Lives Matter movement,” he said in a tweet. “He has been wearing the shirt for months in meetings.”

Swinney last week commented on the death of George Floyd, the Minneapolis man who died in police custody May 25 after an officer kneeled on his neck for more than eight minutes in a moment caught on cellphone video.

“Sometimes it’s better to listen than speak. It’s not about trying to speak first or something like that. I’ve spent the last week listening,” he said.