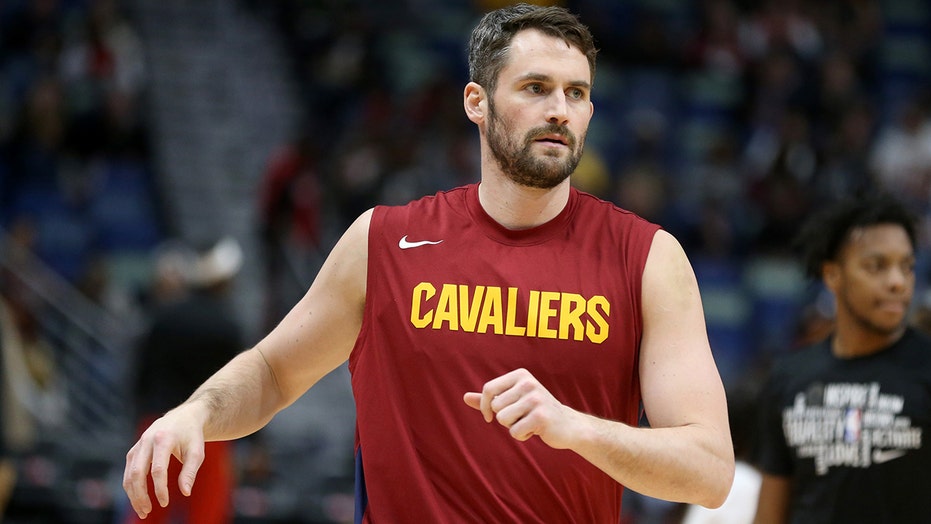 Cleveland Cavaliers’ Kevin Love was one of the few players to enter a training facility Friday as the NBA slowly begins its path back to normalcy amid the coronavirus -- but the five-time All-Star described his first day back on the court in almost two months as any but normal.

Love, 31, told ESPN that getting to pick up a basketball again “was a big dopamine hit” but the experience was “odd” from the moment he reached the Cavs' practice facility in Northeast Ohio.

"[They] asked us a few questions," he said. "How we're feeling, if anybody has been sick in the house, if we've been sick, if we've basically adhered to all the guidelines that are put in place, not only by the NBA but state to state."

Love said his temperature was taken and when he got inside, he had his own half-court to work out on while an assistant coach wearing gloves and mask assisted him while he drilled.

"I had [Cavs assistant coach] Dan Geriot at my basket and having him rebound and pass me the ball with a mask and gloves on. It's just odd. It's just weird."

Love continued: “It's just going to change the way -- at least for the foreseeable future -- of not only how we interact but how we live in our daily lives. So for me, was it weird? Yeah."

Each player area had its own table with snacks, towels, water and disinfectants, according to the report. Players were even given their own basketballs to use and were asked to change out of their outside clothes into gear provided to them upon entering -- this included sneakers, too.

Players had limited use of the facilities, which meant no showers.

"I changed my clothes and got out of there and showered at home," Love said, "which doesn't bode well for a guy like me who sweats a lot."

Despite the glaring changes that players will have to abide by for the foreseeable future, Love seems to think it's worth it.

"For me, I played 25-ish years of organized basketball, and this is the longest I've ever gone without touching [a basketball],” he told ESPN. “... It definitely was a big dopamine hit, and it just felt great to get in there and sweat outside of doing my workouts at home or getting on a treadmill. Going out there and having some sense of normalcy and getting on the court and actually shooting was pretty uplifting."

NBA Commissioner Adam Silver told players in a call Friday that he would like to finish out the remainder of the season in a two-site scenario that would include a traditional seven-game series playoff structure and would likely include no fans -- a measure that could carry into next season.