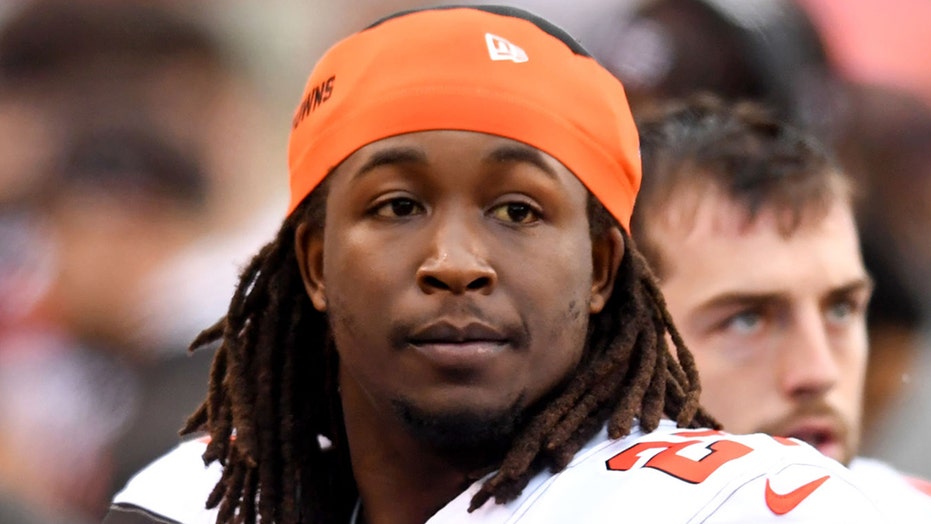 Cleveland Browns’ running back Kareem Hunt found himself in trouble again after getting pulled over last week for speeding and getting caught with marijuana and an open container of vodka.

Newly released dashcam footage from the Rocky River Police Department shows Hunt, 24, telling the officer during a traffic stop on Jan. 21 that he would fail a drug test if given one. Hunt also vents to the cop about struggling to watch his former teammates prepare for the Super Bowl.

Hunt was pulled over around 12:30 p.m. for speeding and can be heard in dashcam footage telling the officer that he was just trying to catch a flight. After smelling marijuana, the officer asked to search the car and found a small amount of pot in a backpack in the backseat, FOX8 reported, citing a police report.

"I promise you, I was not smoking in the car at all. It's not just mine. Officer, I don't like, that's not mine, like all mine," Hunt told the officer before eventually admitting that he would fail a drug test if given one.

“It was off-season. Sorry, I was having a good time."

The officer also found an open container of vodka in the backpack, but ultimately just issued Hunt a speeding ticket and seized the weed and alcohol.

"I hate to say this, but you of anybody should know if you're trying to stay good, stay on the right path, this is not the way to go," the Browns fan told Hunt. “I mean, you had, like, a good second part of the year. You don't want to screw that up over some weed.”

Hunt explained that he has been dealing with recent struggles both on and off the field.

"I should be playing for a freaking Super Bowl," he said. "It hurts my soul. Like, you don't understand, I've been fighting a lot of s--- lately, man. It still hurts me to this day.”

Hunt added that he “loves the Browns” but he just feels like “the worst person in the world sometimes.”

Hunt was cut by the Kansas City Chiefs in 2018 after a video surfaced appearing to show him punching and kicking a woman outside a hotel room in February the same year. He was never charged, but the NFL suspended him for eight games after he signed with the Browns in February 2019.

He made headlines again in July after getting into a physical altercation outside a Cleveland bar.

“It was a misunderstanding, and I appreciate that the Browns still had my back ...,” Hunt said at the time. "I look to move forward and continue bettering myself and working and getting ready for the season."

The Browns are aware of Hunt’s latest run-in with the law, ESPN reported.

Rocky River Police Department Lt. George Lichman told FOX8 that Hunt was not charged over the drugs because state labs cannot yet distinguish between legal hemp and illegal marijuana in such small amounts. He added that Hunt wasn’t charged over the alcohol, because it was in a previously opened, but sealed container and that there was no indication he had been drinking that day.