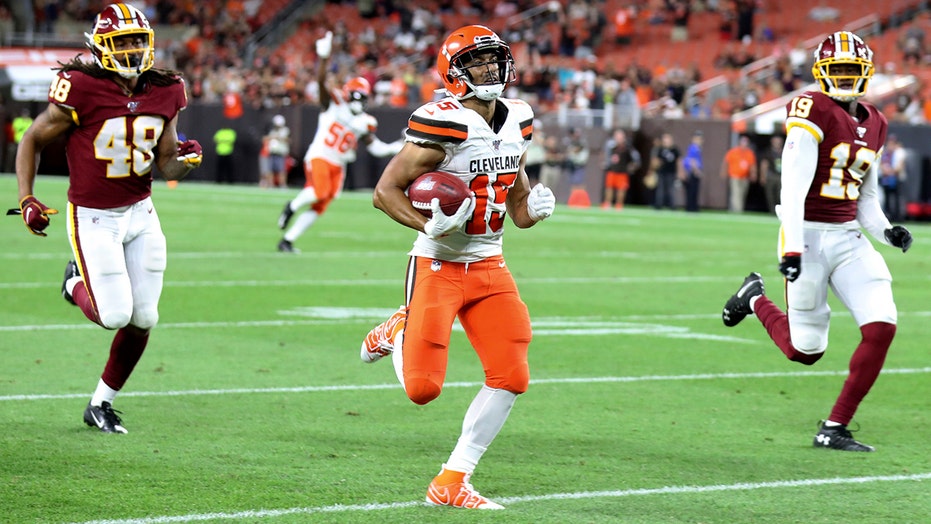 Cleveland Browns wide receiver Damon Sheehy-Guiseppi played at a no-name school, crashed NFL tryouts and had to sleep outside and in a 24-hour gym just to try to get a shot to make the team.

In his first preseason game with the Browns on Thursday, he found himself in the end zone.

Sheehy-Guiseppi fielded his first punt return in the preseason against the Washington Redskins and made the most of it – returning the ball to the end zone for an 86-yard touchdown. The score was part of the Browns’ blowout 30-10 win against the Redskins.

After he got into the end zone, his teammates dog-piled on top of him.

“I felt all the love,” he told the Cleveland Plain-Dealer after the game. “I couldn’t breathe under the pile. I was over there gasping for air, but I felt all the love. I saw all of them come running down there and it was just a blessing.”

Sheehy-Guiseppi told NFL Network's Mike Garafolo that he wore his teammate Odell Beckham Jr.'s cleats because he had misplaced the ones he wanted to initially wear during the game.

The Cleveland Plain-Dealer detailed Sheehy-Guiseppi’s journey in a profile in May.

Sheehy-Guiseppi tried out for the Canadian Football League and multiple times for the Arena Football League but failed to make a team. At that point, he had already been in Arizona for a year and spent $100 participating in the CFL tryout, according to the newspaper.

He then had made a connection with someone from a flag football league. The person let him know of a tryout taking place in Florida and to be on the lookout for Alonzo Highsmith, the vice president of player personnel for the Browns, at the tryout, the Plain-Dealer reported. Sheehy-Guiseppi was prepped and ready for the tryout. As soon as he saw Highsmith, he knew he had to introduce himself.

The Browns have since kept him around and with the touchdown on Thursday night, it appears he has a real shot at making the final roster before Week 1.